I'm too busy watching the Jets / Colts to do more then make a mention, but two modules were just released for Swords & Wizardry. 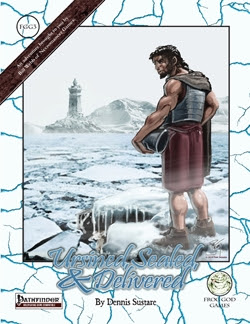 Ursined, Sealed and Delivered - (the blurb)


One of the One Night Stands series, Ursined, Sealed and Delivered is a newly written adventure module, but it's a truly unique window into the early days of the game. The module is written by Dennis Sustare, the designer and author of the original Druid class that has become a key character class in virtually every fantasy game ever written since 1978. I've done almost no editing of Dennis's text, although the tournament format has been shifted around to be more easily used during play. The result is that you are about to read an adventure that's a direct window into the imagination of one of the great figures of fantasy gaming. Any typographical errors or glitches in the "flow" of the adventure are the responsibility of the editor, and all the high-adventurous moments of this fast-moving, gripping adventure are to the credit of the author.

In addition to being written by Dennis Sustare, the module has cover artwork contributed by Paul Jaquays, who is also one of the great figures of fantasy gaming art. This new artwork sees the return of Paul's unique style, which will be instantly recognizable by those who gamed during the seventies and early eighties; it is an iconic, original vision of swords & sorcery that has not been seen on the cover of a module for decades. We're proud to be able to bring a new piece of Jaquays art to younger gamers who may never have seen examples of it before. He portrays a world that is stark and fierce, more visceral than art based on high fantasy, with the sort of rough-edged heroes who inhabit the fiction of sword & sorcery's earlier days, before the world-shaking influence of JRR Tolkien rearranged the foundations of the genre at every conceivable level. 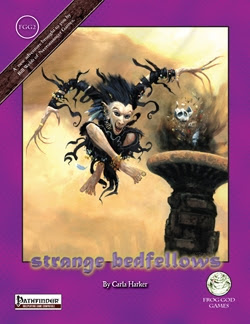 
A circus show erupts in mayhem when goblinoids crash the performance, slaughtering performers and audience members alike. PCs investigate the attack, leading them into an ancient dungeon and uncovering ancient secrets and harbored grudges. Their decisions affect the politics and economics of three unique towns.

Strange Bedfellows is a d20 adventure for 4-6 PCs of level 2 or higher and includes three fully-developed towns, numerous unique NPCs who offer an extensive assortment of side quests, and a wide range of challenging opponents.

Uncover ancient evils and secrets while discovering the reason for the attack at the circus.

Make decisions that affect the long-term politics and economics of three towns.