How do you Treasure? 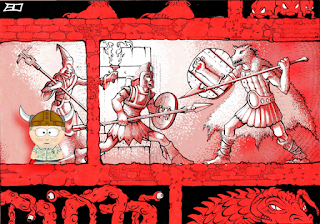 Last night my bi-weekly online OSR game started off with all the players looking at a massive treasure loot list assembled from the almost four levels (for my Magic-User at least) worth of adventuring.

It was an odd moment for me because while I was pretty content with my character and what I'd earned/had been given, there was a LOT of treasure and the argument could easily be made that I hadn't gotten "my fair share".

Again, since I know some of my group occasionally reads Tavern posts, I need to be clear I was content well before the start of last night's session......it was just a moment where I was able to mentally "pull back" and compare/contrast this group to others I have played with before. There is also the difference in general between a more free-flowing OSR game and a crunchy rules-heavy game like my beloved HackMaster.

.....and no, this isn't a segue to a HackMaster discussion. You're safe today.

My current group is a LOT like every group I've playing in that as we come across magical items the group is quick to initially hand out stuff to those that can make the best use of it during the current adventure. When my 1st level Magic User joined, they handed me a bunch of scrolls, potions, and a few wands right off the bat to make me as useful as possible. Of course I used the scrolls to pad my spellbook where I could, again.....to be useful. As we adventured and came across magic-user "stuff", there was no discussion......it was handed off to my PC, and those items didn't really get added to the treasure list. Now I didn't necessarily consider everything "mine", but I'm sure I can point out a few items that I definitely do.

In previous groups, those quickly-divvied items are usually added to the total loot list and then at the end of the adventure formally awarded to party members. I've seen magic items priced out and factored in to the shares calculations and I've seen them simply counted as "1 item" and the players pick which items they want in some sort of selection process.

Now I think the idea of permanently dividing up magic items at the end of adventure is a good idea IF your group is fluid or if each PC needs to take care of their own affairs. If my Magic User had a homestead to see to, or floated between groups (like if we had a pool of PCs playing together under multiple GMs) then I'd want my share of coins and treasure after each adventure....and "my" loot would be at risk for loss when I'm off doing murder-hobo stuff.

Adding even more crunch you might have an actual party charter that already establishes how treasure is to be divided and has allocations made for party expenses. Usually those things have treasure priced out and then divided into a specific number of shares. If your PC wants an item you'll have to pay for it with coin, either directly or indirectly by having that amount of gold deducted from your award of shares.

There's no wrong way to divide treasure, unless it drives a wedge between players. I've had that happen, but really there were other problems and the division of treasure was just another opportunity to highlight those problems.

Now along the lines of magic items and loot division, I've seen a LOT of difference between players and GMs when it comes to identifying magic items. Now I'm a big fan of not telling the players that an item is magical without being identified, but as a GM....what a total pain in the ass. Give the players a +1 sword and do you want to keep track of that PC missing by one or adding a hidden +1 to damage with that weapon? If there is a secondary effect, what do you tell the players or just describe what they see? Maybe magic items just don't work unless identified?

That doesn't make sense to me. If it's something obvious, like a +1 Sword that does an extra 1d4 of fire damage, it seems easy enough to just tell the players, unless the fire effect requires some sort of activation. Then I'd tell the players about the +1 and unless the party has the item formally identified, they'll never find out. Ideally the party has a standard operating procedure (SOP) of getting all the treasure spread out and scanned with a Detect Magic spell. Good way of catching hidden magical jewelry, or determining that there is more to that simple +1 Sword.......

Now what I've done in the past as a GM is use a index card system for treasure, but my party liked to divvy up items immediately after each adventure. Each item got a white card with a code on it and a quick description and rough GP value. If the item is magical I have a red note card on standby with that code and the same item description, but there is an additional note as to rough power level and new rough GP value. Lastly there is a similar blue notecard like the red card, but it has the full effects of the item and the official GP value. It's a little more prep work, but not a whole lot and a simple note card file box keeps shit organized.

Anyway, all these thoughts stemmed from an initial look at how my current party handles their treasure. Of course I only have my own experience to go off of, which leads me to ask, how does your group handle treasure?

Posted by Christopher Stogdill at 3:24 PM

Email ThisBlogThis!Share to TwitterShare to FacebookShare to Pinterest
Labels: loot, not Erik, treasure