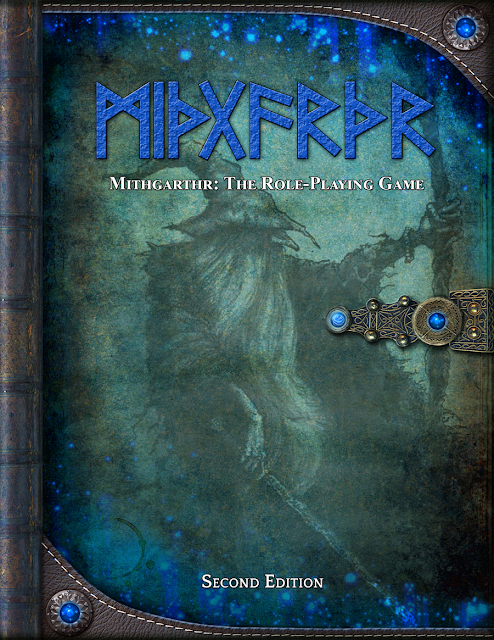 There's much to say about the Mithgathr RPG. While built off the 5e rules engine, it makes its statement with old school sensibility. Although I am not comfortable, let alone confident enough, to run a 5e RPG session, give me an hour to prep time and I'm pretty sure I could run Mithgarthr. More importantly, I'd WANT to run Mythgarthr. It's dark in all the right places...

Mithgarthr 2e was recently released in PDF and is being offered with a campaign starter in a bundle for 7.49. The rules by themselves are normally 9.99. Seriously, this is good stuff.

Enter a rich, original world inspired by Norse and Germanic culture. Explore the dark places where Gooblitts and Dýrverr roam. Battle against the treacherous forces of Chaos led by Orcus and The Thrir. Die horribly at the hands of Greenskins while trying to get rich quick with your friends!

Mithgarthr takes its mechanics from the fifth edition of the world's most popular role-playing game, but molds them against its grim setting. Characters start at zero level with just the skills they have from their mundane profession (of which there are nine to choose from) and a desire to make a better life for themselves. Players may choose from seven races including the murine Ratten and the winged, hawk-like Fjothr. Life is cheap and death comes often, but those adventurers who survive long enough to attain first level have eight iconic classes to choose from. Magic is cast using a point system, and is less common than usual. Monsters have their own magic system, drawing their power from Orcus.

Included in this core rulebook is everything you need to play a campaign in the land of Mithgarthr. Character creation rules, combat, adventuring, equipment, magic, monsters, world and setting information including a completely detailed large city, and also a fully fleshed out town and surrounding area including an introductory adventure to begin your journey into the realm of Mithgarthr!

The town of Northderry, nestled in the foothills of the Tralaberg Mountains to the west of Riverton, is a picturesque mining community that proudly exports over half of the copper used throughout the entire kingdom of Karak.

Bandrem Ironfinger, from the Northderry Mining Guild, has recently learned of the existence of map which leads to a rich gold vein, and he must have it. If only there were townsfolk willing to take on the mantle of adventurer to retrieve it...

The Northderry Mining Guild is an introductory campaign for the second edition of the Mithgarthr Role-Playing Game that picks up where the adventure in the back of the Mithgarthr rulebook left off, and takes your characters from level 1 up to level 3. Featuring a large, multi-level dungeon main adventure, multiple side-quests, new magic items, and new monsters, this campaign provides many sessions’ worth of adventure to kick off a new second edition Mithgarthian campaign!