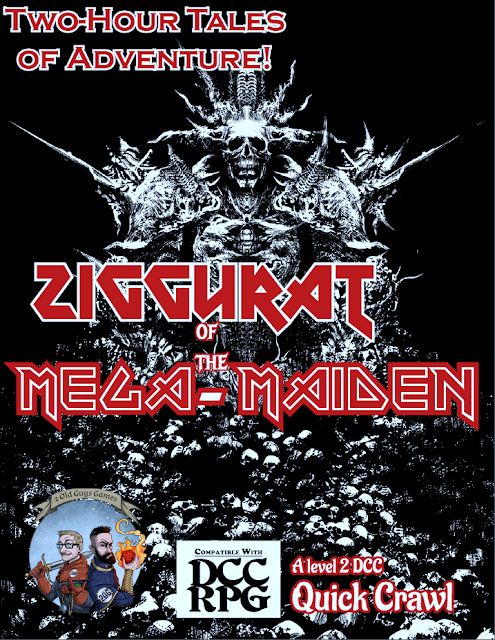 Ziggurat of the Mega-Maiden literally had me at Iron Maiden :)

The fate of the world in the balance!

This is a what now? An experimental Speed Metal Dungeon? Yes, yes, it is. The idea emerged while listening to, shockingly, heavy metal. Specifically, Iron Maiden and Megadeth, hence the title and content. So, what’s it all about?

The PCs have been on the path of The Cult of the Mega-Maiden. The Cult seeks to bring the Demon Seed of Deth to the Iron Ziggurat of the Mega-Maiden. There they hope to perform the Ultimate Ritual and fulfill the Prophecy. This will break open the Demon Seed and bring the Wrathchild into the world with the Mega-Maiden acting as surrogate mother. We begin in medias res, in the middle of the plot. This gives Judges various options to drop this into an existing campaign with some minor set up, make this the culmination of previous adventures, or just run his as a speedy one-shot.

The PCs stand at the foot of the Iron Ziggurat of the Mega-Maiden and it is 2 minutes to midnight. They have 20 rounds to get to the top or the ritual will be completed and the Wrathchild will gain entrance to the world bringing death and destruction of unimaginable proportions.

Perfect for 6 DCC Level 2 PCs, Challenging for 4-5 DCC Level 2 PCs. Deadly for anything less, but still fun. Perhaps a mob of villagers don't want the world destroyed and this turns into a funnel with lots and lots of dead villagers in a mighty struggle to save all of existence!

What are Two-Hour Tales?

Quick Crawls are perfect for in-person or online play and include maps and tokens to facilitate that. Additionally, the Two-Hour Tales work well online as we have found that people begin to fade or lose focus after around 2.5-3 hours. These DCC Quick Crawls, as we call them, will be PDFs only.

The Two-Hour Tales run about 2,500-3,000 words. Each will have at least one map, several tokens and a complete three-part adventure. All NPCs will have a Strategy section so Judges get insight into how they act and fight. We will break out all new spells, creatures and items into reference cards. This will help the Judge run the Two-Hour Tales by giving them all the info they need for each specific encounter in the Quick Crawl.

Additionally, each Quick Crawl leads into longer campaigns after the Two-Hour Tale with our Further Adventures section which gives ideas on how to continue along a specific storyline. Later Two-Hour Tales can be dropped in as side quests or events in between major campaign action.

In playtesting, this adventure took just under 3 hours. We imagine most groups will finish by then.