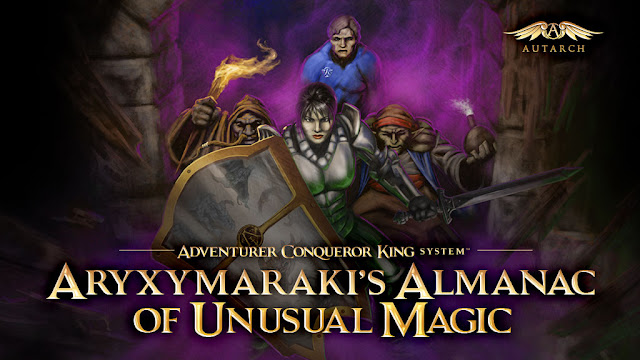 I'm a huge fan of the Adventurer Conquerer Kings System (ACKS). It's a modular OSR system that draws upon B/X yet breaks it down and rebuilds it. It's that rebuilding that I find so useful in my old school gaming campaigns, even if I'm running with Swords & Wizardry.

I'm also a huge fan of alternative magics, as it just seems to make magic more, well, magical. Aryx's Almanac of Unusual Magic seems like it will scratch two itches.

The Almanac is a 56-page treatise on new and unusual magic. Within the pages of the Almanac, you will find four new kinds of magic, each of which uses magic in new and exciting ways:

Dwarven earthforgers inherit an ancient tradition allowing them to draw on the spark of the divine found in all creation to power their magic.

Gnomish alchemists are experimenters whose concoctions range from ‘helpful and safe’ to ‘incredibly poisonous’.

Terran engineers are scientists and builders from another time, whose inventions and tinkering certainly appear magical to most non-technological societies.

Warlords draw on the chaotic energy of battle, taming it with their practiced tactics and leadership to ensure that their side wins.

All of these classes use variants on ceremonial magic, introduced in the Heroic Fantasy Handbook. Three of them use eldritch magic, and many of the spells on their spell lists are described in that book. The fourth (the dwarven earth-forger) uses a new kind of magic, gnostic magic, which relies on using the power in existing materials and can have terrible effects should a practitioner try to avoid that requirement.

Every campaign is a law unto itself, and you as Judge can include as many or as few of the elements of the Almanac in your campaign as you desire. Each class is entirely self-contained, and none of them rely on the addition of any of the others. Because they use eldritch magic, the new spells (and tactics) described for the gnomish alchemist, the Terran engineer, and the warlord constitute more than one hundred new eldritch spells usable in any campaign that includes eldritch magic, even one that doesn’t include any of these new classes.

Of course, full builds for all of the classes and spells, and the source factors for gnostic magic, are included as well, allowing you to build your own content to expand what’s in the Almanac. Build your own gnostic spellcasters, or use the additional spell design factors to create your own new spells. Even in a book that’s largely new player options with these new and exciting classes and spells, we include something for the Judges out there. Magic is all around you. Are you a forger of creation, an engineer of wonder, an alchemist of the unknown, or a lord of war? Discover what kind of unusual magic speaks to you, with the help of this Almanac!