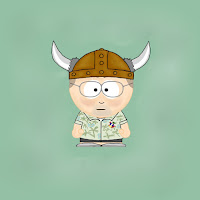 1st off, get your mind out of the gutter.....there's only room for one down here.

Clearly I am talking about gaming here, specifically RPGs....this is Tenkar's Tavern after all!  Sometimes you want a bit of a table-top fix and you've got nobody to sling dice with. It happens and thankfully with the advent of this whole interwebs thing you can play online at a virtual table, but I'm talking specifically about when even the virtual table top is a no-go. Basically my main experience as a game-starved kid.

I get that maybe we'll just have to put on our big-boy pants and suck it up......play something else or just do without, but it just sucks to not be rolling dice when you want to be rolling dice.....

.....and for the three of you that are probably thinking "Well go play some Yahtzee then!"....well you can go fuck right off! (Erik....I can tell readers to "fuck off" here, right?). I want to be slinging spells and bashing orc's heads in, not trying to roll a straight or a flush. The only time I want 3d6 in my hand is rolling up a new PC or a higher-level Magic Missile.

Still, if you're by yourself you might have to make some allowances, but still no Yahtzee....I think I've made myself clear there. 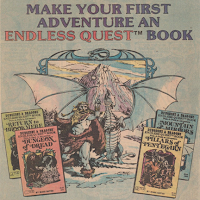 Personally my initial go-to has been the good old-fashioned Choose Your Own Adventure Books. Now, not the mainstream series.....I don't want to be playing as a fricken race car driver.....but the Endless Quest series from TSR. I had a small set of these as a child and last year I found some at a local HPB. Unfortunately those were is near mint condition so now I should be looking for a worn or electronic copy so I can have some nostalgic fun. Now there were some other similar books out there, but hell if I can remember their names after 30 years. The ones I liked let me roll some dice and (I know I mentioned this before) I kind of cheated, which made it so much more fun. What I did is map out the game as I played so some of those dead ends were not so much dead ends and if I needed to get back to that one magical healing fountain I could heal-up and then press forward. 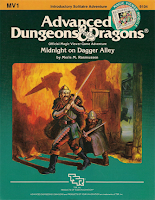 The next step up, at least for me, was the rare find of a Solo D&D (or AD&D) printed adventure/module. There were a couple different ones out there. The "Magic Window" type and another with invisible ink. I remember getting my hands on a couple, but they were literally one-offs that were hard to find and harder to play. I remember the invisible ink pen not working and being so frustrated. I did really enjoy Midnight on Dagger Ally (MV1). In a more modern(ish) vein, there are some Solo Adventures you may not have seen. I know KenzerCo had a couple for HackMaster 4th Edition that were dual statted....I believe for D&D 3.5(?), but in a pinch you could easily use the HackMaster version for AD&D. I've also played a DCC Solo Funnel called The Hounds of Halthrag Keep (which is a free PDF from DTRPG). That was fun, especially if you like churning through PCs.....it is a DCC funnel after all.

Well that's it. Those were my two options growing up and thankfully not my only options these days. My problem, at least as a game-starved boy with way too sharp polyhedral dice, was that I didn't know what I didn't know. I did not know there are entire fricken RPGs dedicated to solo or solitaire play.

Holy crap.....Tunnels & Trolls, where have you been all my life? Where was my "Cool Uncle" that introduced me to D&D? Totally failed on me here. The Church didn't have T&T on the "bad list" so my parents conceivably could have bought the 5th edition of the game (I'd have taken editions 1-4 happily). All those dry gaming years wasted on things like school/book learning, girls, Boy Scouts, and chores (not in that order) when I could have been the dork in my room slinging dice!

Seriously though, there are several different RPGs, not necessarily Fantasy Hack & Slash RPGs, out there these days to check out. I'm looking at some now, but until I've vetted them......

I would suggest, to those of you of the adventure or Zine writing persuasion, to take some time to maybe write your own solo adventure for your preferred game system. You can easily take what I've already mentioned as initial inspiration. One of these days I really want to write up a new Choose Your Own Adventure and I think I have some cool ideas to make it work.....but we'll see.
Posted by Christopher Stogdill at 12:45 PM