If you missed the beginning of this saga, I'll send you to the initial post where I shared the original email chain. Today, I received another email. Vaguely threatening and now with new spice. Shall we look and see what today brings? Tenkar

edit edit: looking for proof of the above - Tenkar

I'm circling back because we are publishing our article on Thursday morning at 10 am ET. (ah, the start of Gary Con. And yet, in the initial email she referred to Gen Con. Wonder why?) Like I said in another e-mail, I want to share every instance pertaining to you that we're referencing in the article so nothing surprises you (and I wish to share all of your communications with me. again, so there are no surprises). I also wanted to give you a final chance to offer on-the-record comments on anything mentioned below or off-the-record fact-checking responses.

Queries and statements below:

- We mention that you run a blog pertaining to old-school gaming and the community around it.
- We mention that your blog documents in detail and often criticizes Gail's treatment of Gary's legacy, including her approach to instituting a memorial statue and publicly releasing Gary's creations. Do you have any comment on this? (my posts speak for themselves, although if you want posts about me speaking about the IP it will be a light load to tote)
- We mention that Gail says she is not comfortable being around you, which has influenced her desire to attend Gary Con. (that's strange, but I guess if you were an individual looking to avoid criticism, you would avoid your vocal critics)
- We quote screenshotted private chats in which you joke that Gail would try to trademark the word "Cunt" (that's a funny joke actually. Wish I could remember saying it. That being said, I have referred to individuals that have threatened me with groundless legal action in attempts to intimate me as "cunts" in the past, in private and public, regardless of gender or age. I make no apologies) (Rachel -   The true Irish style way to use the word "cunt" and especially when it is applied to both genders) and in which you reference burning rubber bricks (If I said this I am embarrassed by the lack of funny and I would be forced to apologize), perhaps an allusion to her memorial (exactly whose memorial are we talking about? I thought it was a memorial for Gary Gygax, not for Gail). Do you have any comment on this?
- We mention you saying that Gary Con's attendees are negative about her presence. (Its quite likely I said so as have many others.)
- We also mention you posted our e-mail exchange on your blog. (yep, and posted this one too)

Like I said before, we'll be publishing at 10 am ET on Thursday. Look forward to hearing back. (Impeccable timing. So, any luck with actually showing these screenshots you are alluding to?) 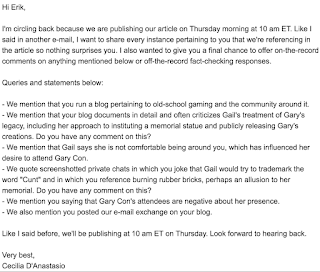