Its that time of the year - Christmas in July! I'll be offering up what I think are some of the better OSR picks in the sale, but today I'm highlighting the ENnie nominations that are OSR or Old School by nature. Link to full Christmas in July Sale

The Dark of Hot Springs Island - "The Dark of Hot Springs Island is the game master's book. It is a fully illustrated 192 page book. Hot Springs Island is a hexcrawl, and the Dark contains all the details needed to run a sandbox game there. There are 75 locations on the island, and 26 maps ranging from ogre villages to a ruined elven city to the volcanic lair of a vain efreet. Seven factions, 87 interconnected non-player characters and 300 problematic treasures are sure to generate plenty of lingering repercussions each time your players make a decision. Finally, 448 random events and encounter motivations help ensure that every play-through of Hot Springs Island can explode into wildly different outcomes from the same basic parameters. The setting is system neutral, so there are no stats for monsters or prepackaged treasure parcels. No levels are assumed, and there is no path of advancement through this tropical wilderness."  4.99  3.74 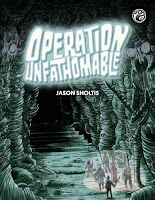 Operation Unfathomable - I have this and oh so much want to run this - Tenkar "OPERATION UNFATHOMABLE is a 108-page, internally-consistent, gonzo funhouse module for Swords & Wizardry that runs like a subterranean wilderness trek instead of a “down the 10 foot hall and kick in a door” affair. There are random elements aplenty to keep GMs guessing as well as players. No balanced encounters to be found here, but the clever setup allows low level characters to drop into the dungeon “deep end” and still have a chance of making it out alive—if they’re smart and wary."  12.00  9.00

The Midderlands - OSR Bestiary and Setting - Not only do I have this, but I have the Midderlands Expanded - top notch - Tenkar - "The Midderlands is an old-school game setting with bestiary for use with old-school role-playing games. It is based on Swords & Wizardry Complete, but could easily be used with other old-school systems and even non-OSR systems such as D&D or Pathfinder. It is a green-hued, dark-fantasy, late-middle ages, early-renaissance view through grime-smeared spectacles. The setting itself is based on an area in the middle of England near where I live called The Midlands. Many of the locations are loosely based on reality, but others are pure fantasy from an addled mind. The setting part of the book contains something I call "game-juice". Not heavy of history and monotonous detail, but enough to get the game-juices flowing and let the game master twist and tweak as they need to in order to fit their campaign."   15.69  11.77

Fever Swamp - "The air is moist. The moisture mixes with your sweat — the heat is relentless. The drone of insects gives you headaches, and the fever from the infected wounds has left you delirious. Your raft is damaged, and there are spirits in the trees. You’ve only been here for three days. Fever Swamp is a hex-crawl sandbox adventure compatible with Lamentations of the Flame Princess and most other Dungeons & Dragons clones. Fever Swamp was written by Young Master Luke Gearing, previously famed for his contributions to the world's favourite outsider role-playing 'zine, The Undercroft, and illustrated by Andrew Walter, who surreptitiously inserted sigil magic into his work on our previous publication, Crypts of Indormancy, to uncertain ends. We encourage you to purchase and investigate it for yourself, for the greater good."  7.85  5.88