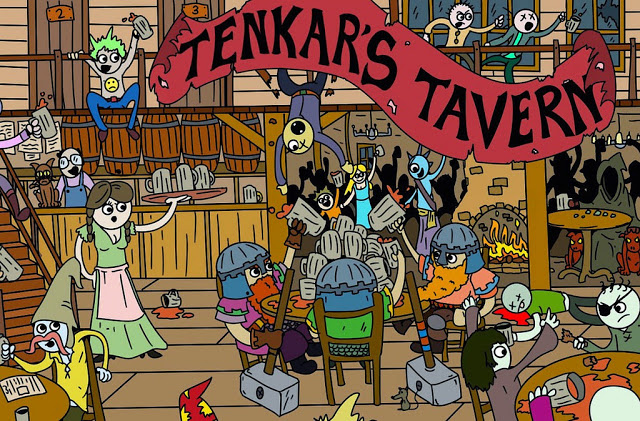 Yep, the overhaul of The Tavern's Patreon was long overdue, as The Tavern is not about content creation (though there is some of that). Instead, it's about gaming news and community. The community that has formed at The Tavern in its various forms it what keeps me doing "this" (whatever "this" is) every day and I enjoy every moment of it.

What follows is the support levels and goals (goals are no longer based on monies pledged but the number of backers, a much better fit for The Tavern):


Tip Your Bartender
$1.50 or more per month
A hearty tip for your bartender! I thank you! The community thanks you.

Discord Patreons
$4.50 or more per month
You'll have a special title and color on the Tenkar's Tavern Discord Server telling the community your are a backer of Tenkar's Tavern. Additional benefit is a position on the Backer Blog Roll

Let's Talk
$10 or more per month
A private weekly voice chat with members of the Let's Talk level or higher. Day of week and time will be announced prior to the chat. We will use Discord. Length of Chat 30 minutes plus. Includes Discord rewards

Royalty
$20 or more per month
Your are Royalty. Suggest a topic(s) for the daily podcast and I'll try and get it done. Includes benefits of all prior level Includes Discrd rewards.

Patreon of the Podcast
$25 or more per month
Sponsor the Tavern Chat Podcast for a week. Get a mention at the beginning of the episode as a sponsor and get a link on the blog post sharing the episode. Additionally, all bonuses from prior levels apply. Includes Discord rewards.


When we hit 25 supporters a month, a minimum of 5% of the monies raised will be Kicked Forward to other RPG related gaming projects on Patreon. - Reached

When we hit 50 supporters a month, I'll add a monthly "off hours Tavern Chat" on the Discord Server to accommodate members of the community from across the pond.

When we hit 100 supporters a month, Feltothraxis, the infamous Dragon Puppet known for knocking a certain well known OSR product off of a porch would return in a series of videos if this goal is met. All hail Feltothraxis!

When we hit 150 supporters a month, I'll organize an informal online old school gaming convention via Discord and Roll20. Run by gamers for gamers. As long as this goal is met, I'll organize such a con once a year.

When we hit 250 supporters a month - If we hit this "unreachable goal", I'll organize an informal online old school gaming convention via Discord and Roll20 four times a year - once per season. Run by gamers for gamers. As long as this goal is met, I'll organize such a con once a season. Additionally, I'll run at least one session each time for backers of The Tavern.

Personally, I really want to see TenCon or Tavern Con, so 150 supporters is the level where I get dreamy eyed.

For the goals, its not dollars but supporters. Your buck-fifty carries as much weight as someone sponsoring the podcast.

The Tavern in all of its forms - the blog, the Facebook Community, the Discord Server and the daily Tavern Chat podcast, will always be free and The Tavern will remain a Neutral Ground.

There is no obligation. If you can support, great. If you can't, that's fine too. Above all, enjoy and participate and make it yours.

Link to The Tavern's Patreon:  https://www.patreon.com/tenkarstavern
Posted by Tenkar at 7:10 PM

Email ThisBlogThis!Share to TwitterShare to FacebookShare to Pinterest
Labels: patreon, state of the tavern