WotC is running a flash sale on Dragon themed releases from various editions of Dungeons & Dragons. I'll be highlighting some picks from D&D 2e and earlier. (as this post goes live there is just under a day and a half left for the sale) 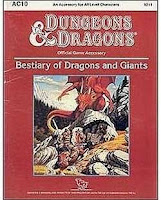 AC10 Bestiary of Dragons & Giants (Basic) - Red dragons. Storm giants. Dragon rulers. Frost giants. They're all here, in this book, in complete, ready-to-play mini-adventures. No matter what level your characters are, there is something here for you (and them). Need a diversion? Want to spice up a long-running campaign? Want to play, but don't have more than an hour or so? This is the book for your gaming group. As DM, you have everything you'll need to play right at your fingertips. As players, you'll have challenges worthy of your characters.  5.00 1.65 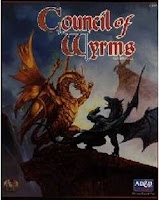 Council Of Wyrms (2e) - Council of Wyrms provides everything you need to create a campaign for dragon player characters. In addition, there are rules for creating elf, dwarf, and gnome "kindred" for your dragon, and details on two new character types: half-dragons and dragon slayers. Inside you'll find: A 64-page Rules book packed full of rules for creating and playing dragon, kindred, and half-dragon player characters, A 64-page Campaign book detailing a dragons' campaign and the legendary Council of Wyrms, revealing the secrets of dragonkind and outlining new player-character kits, A 64-page Adventures book to challenge the strongest dragon characters, 12 full-color reference cards, 3 full-color posters, including a dragons' size-comparison chart, a map of the dragons' island homes, and a guide to the dragon clans.  9.99 3.30 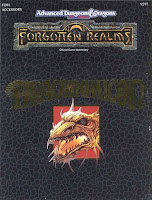 Draconomicon (2e) - The creatures of lore and legend-of myth and mystery - only the dragons know the answers to the secrets and ciphers that surround them. But brave adventuring souls who have gone before have left behind clues and epistles with valuable information for anyone in pursuit of dragons. This tome is a compilation of the lifetime efforts of numerous dragon-hunting adventurers, presented to those who crave hints and leads for dragon-questing.  9.99 3.30

Dragon Kings (2e) - Only the most powerful characters are destined to rule Athas. Warriors with vast armies of followers campaign for glory; rogues become masters of illusory magic to further their deadly schemes; spellcasters who can also master psionics open whole new tomes of magic available only to them - the most powerful spells ever! And not only do they gain greater magic, the spellcasters take on entirely new forms when they advance beyond 20th level - clerics can attain elemental form; preservers mutate into magnificent avangions; defilers can actually transform into dragons themselves! Learn of these advanced beings, the new magical spells available to them, plus new psionic devotions and organizations, military vehicles and army lists, and more, all within the pages of Dragon Kings!        9.99 3.30 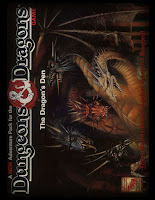 The Dragon's Den (Basic) - The dragon laughs and prepares to strike. But you were nearly defeated by his minions, and you are now too weak to wield your sword. Your magic-user is out of spells; your other comrades, too, have lost their fighting spirit. What hope have you of defeating the vile dragon? Do you run, or do you try one last, desperate plan? This new entry-level supplement to the DUNGEONS & DRAGONS game lets you and your friends play mighty fighters, crafty magic-users, and cunning elves, thieves, dwarves, and more! Inside this box you'll find three complete adventures, each featuring a different dragon. But before you and your friends can confront a fiendish black, green, or red dragon, you must first fight off hordes of evil lizard men, troglodytes, bugbears, and more! Then it's up to you to escape from the dungeon alive!   4.99 1.65 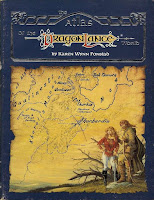 Atlas of the Dragonlance World (1e) - Krynn... Enter the spell-binding world of the Dragonlance Saga with this volume of beautifully rendered maps. Accompany the Heroes of the Lance on their epic travels across Krynn in this magnificently illustrated volume. Behold the beauty of the King Priest's Hall of Audience in the Temple of Istar. Smell Raistlin's herbs as you wander the hallways of the Tower of High Sorcery at Palanthas. Become hopelessly lost in the thirty-five levels of Mount Nevermind.
4.99 1.65 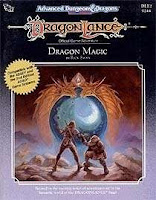 DLE2 Dragon Magic (2e) - The Moons of Krynn are fading. The alignment forces of Good, Evil, and Neutrality are locked in conflict… and evil seems to be winning! The unnatural machinations of the treacherous Khardra—daughter of Takhisis herself!—have led to a crisis of cosmic proportions. The Heroes journey to the Cloud City Cirulon, heart of the Good Dragon races, there to meet the Astral Dragon himself. The nature of a plague claiming the lives of silver dragonhood is revealed, and the cure is presented to the companions. But the road to success is fraught with peril, the only route leading through a secret portal. If this portal becomes known to the forces of evil, disaster will surely result. This AD&D adventure, set in the world of the Dragonlance saga, follows In Search of Dragons. Some burning questions are answered but more are raised. And as the players investigate, the knowledge they gain seems to point more and more to a sinister threat of evil undreamed of since the War of the Lance.  4.99 1.65 (note - Print on Demand for this release is 4.99)

Those are affiliate links above. Affiliate links keep the lights on and the beer cold. We don't like the dark and we like cold beer :)
Posted by Tenkar at 11:29 PM