Gary Con - Wherein I Was Summoned to Run a Table of 5e Rappan Athuk...Transformed into Swords & Wizardry 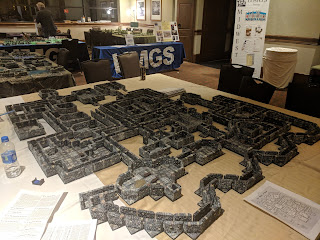 I was working the Frog God booth when I was told shortly after 2 PM: "Dude, you gotta run a 5e Rappan Athuk session - our DM never made it to the Con!"

There were a few issues with that:

1 - I ran the same table last night for Swords & Wizardry

2 - I can run SWL pretty much without opening the rules

So, I got to the table and announced that yes, you are expecting a 5e session but your DM isn't here. I own but do not run 5e, so therefore we are going to be playing Swords & Wizardry. I'll do my best to ensure everyone has fun and if for some reason you don't, et me know where i went wrong at the end of the session.

15 minutes later, we were up and running. No one left the table at the start (but two dropped out at the 2 hr break and we added a new player)

1 - Only one PC death, and that spot was quickly filled by the character's torchbearer.

3 - Treasure was well earned and the players, for the most part, played it damn smart. The dice were in their favor, as least more so than Friday Night's group.

4 - I had a blast and feedback from the players was that they had a good time too.

5 - It left me exhausted, but in a good way. The area we were in was very noisy, and i had to keep my voice projected fairly strongly to be heard.

We lose an hour tonight. Time for bed. Drop by the Frog God Booth tomorrow and take some freebies (and some $5 a pound Pathfinder. Shit, at that price you can convert to S&W right on the actual page. Imagine being able to write in your $15 copy of Swords of Air ;)