Ever read an article and have one of those "holy shit, I was there!" moment? Well, that's what I had when I read this article from Black Gate about this year's Gary Con. Not just due to the fact that I was at Gary Con, but I was there when the author made his purchase from the Frog God booth.


The first folks I met in the booth were authors Keith Hershey and Tom Knauss, who were very friendly and knew of Bob’s work at Black Gate. Tom was the author of their excellent environmental books, including Perilous Vistas and the upcoming Icebound.

We quickly struck up a conversation around the big news of the show — Paizo’s announcement of a Second Edition of Pathfinder. Had the announcement taken them by surprise? In a word, yes. Tom said they were “blindsided” by it, and in fact they’d had to cancel an upcoming First Edition Pathfinder title. Did they think all the attention to the upcoming Second Edition would negatively impact sales of their extensive Pathfinder back catalog?

In response, they wordlessly pointed me towards the table where their first edition-compatible Pathfinder titles were stacked next to a scale. A large sign next to the scale read “Pathfinder by the POUND!! $5″ 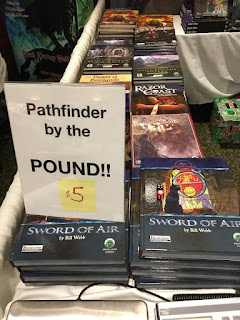 Heh. There more about the Frogs, The Trolls, Northwind Adventures, the Goodman Games booth and more in the original Black Gate article. Its a good read, whether you attended Gary Con or not and I giver it my highest recommendation.
Posted by Tenkar at 11:20 AM