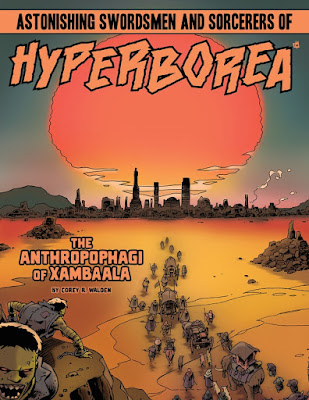 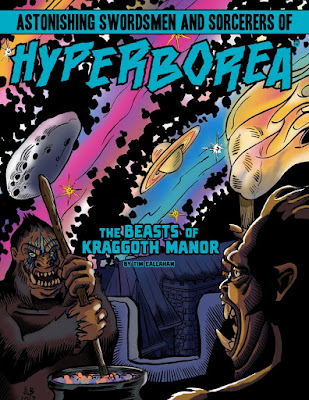 Some of the best OSR adventures come from +Jeff Talanian 's publishing Northwind Publishing arm. Although they are written for and labeled with Astonishing Swordsmen & Sorcerers of Hyperborea, these adventures are readily usable with the OSR ruleset of your choice. I plan on running previous adventures that Jeff has published using Swords & Wizardry. these two will get added to the list. Sweet point for Beasts & Cannibals appears to be $44 - both adventures in print plus PDF. I'm in.

Did I mention it hit and surpassed its 10k funding goal in a day? Well done +Jeff Talanian . Well done.

The Anthropophagi of Xambaala, by Corey R. Walden, is an adventure in HYPERBOREA designed for from four to six characters of 1st through 3rd level.

Visitors to the desert city of Xambaala, beware! When the city slumbers, dæmoniacal cachinnations roll in from its outskirts, and dull totemic drumbeats rumble in the surrounding waste. Vile shrieks and noises out of nightmares bring shudders to the spines of even those who fancy themselves heroes, and when the eventide bell tolls residents lock themselves behind stout walls—for something sinister moves during the dead time. But the people of Xambaala do not speak of the hellish noises that haunt their city; only furtive whispers hint that those who trust in the safety of the inn of Aramis D’Athak oft disappear, vanishing into the unknown. And the sounds outside the city walls grow louder . . .

THE BEASTS OF KRAGGOTH MANOR

The Beasts of Kraggoth Manor, by Tim Callahan, is an adventure in HYPERBOREA designed for from four to six characters of 4th through 6th level.

Your party have travelled northeast from the great city of Khromarium, through the unforgiving expanse known as the Lug Wasteland. You undoubtedly seek greater riches in the north: ruined tombs secreting ancient artefacts, deep caves filled with long-lost Atlantean technology, or strange villages built atop sacred Hyperborean burial grounds that brim with pre–Green Death treasures. Finally, after having emerged from the treacherous bogs, you set up camp on a craggy outcropping that provides dry land and a modicum of protection from the crawling unknowns. Straightaway your attention is drawn by a nearby light source, a fire not more than 100 yards away. Through the cacophony of croaking frogs, buzzing insects, and hissing slimy things, a shriek of pain knifes through the air.