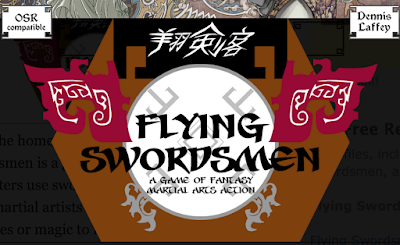 The Searchers of the Unknown - "Searchers of the Unknown is a one-page roleplaying game where player characters are entirely defined by a minimalist old school Dungeons & Dragons one line tat block (e.g. "AC 7, MV 9, HD 2, hp 9, #AT 1, D 1d8 mace") something like monster stat blocks in early editions of D&D. All actions are based on those stats."

Torch & Sword - "What are the design priorities of Torch & Sword? Minimalism and fidelity. By establishing a minimalistic framework, give referees a scaffoldaround which to build. It’s easier to add wanted complexity than remove unwanted complexity. The ambiguities and omissions in the original three booklets are important. What is unclear or unwritten is a feature of the rules. Those gaps give referees room to make their own creative rulings. As to fidelity, Torch & Sword hews as closely to the 1974 rules as necessary to make the play experience true to the original."
Posted by Tenkar at 6:31 PM