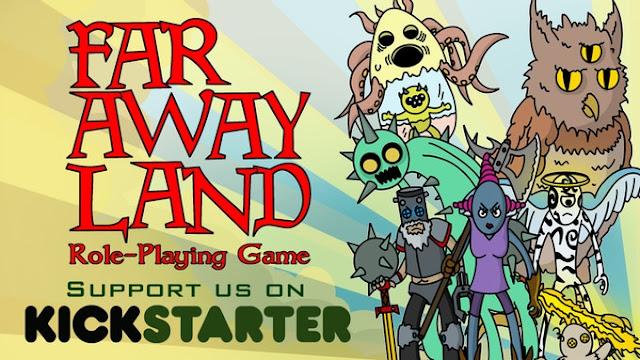 This is the Kickstarter for the Far Away Land (Revised) RPG. I've been waiting for this one since it was first hinted at months ago.

I'm a huge fan of Far Away Land. It has simple yet satisfying mechanics and amazing depth to its setting and flavor. The art? To die for.

Its the only game without direct roots to D&D that I've run since returning to gaming 10 years ago. Of, and the roots might not be direct to D&D, but the indirect roots are certainly there ;)

Back this Kickstarter. You won't be sorry if you do, but you will probably be disappointed with yourself if you don't... 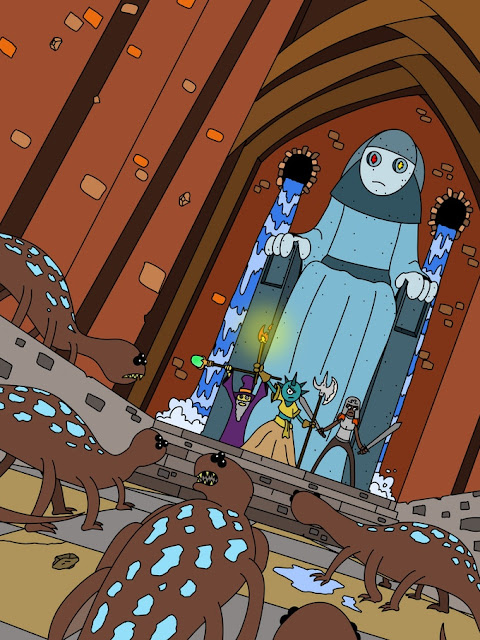 What Makes Far Away Land Unique?

The Setting of the FAL Universe

FAL is quirky, lighthearted, and highly imaginative. The color artwork, although sometimes humorous, hides a dark and malevolent world. While there are some classic fantasy tropes, much of it is unique and specific to FAL. For example, Soracans are giant floating construct heads that shoot lazers and speak dubstep. Angry telepathic nuns riding grizzly bears battle interdimensional Abraham Lincoln clones. A race of symbiotic sideburn sporting, jumpsuit wearing humanoids soar into battle atop giant three-eyed birds. Wizards and necromancers seek power and knowledge. Heroes try not to die. Villains are evil. Far Away Land is a world twisted by an ancient war. The effects of that old war and the portals it opened continue to shape the world.

FAL uses a simple d6 mechanic. Players roll a handful of dice and take the high roll. That roll is then compared to target numbers or opposed rolls to resolve conflicts. The core of the game is basic and optional rules allow the core mechanics to be expanded as GMs and players see fit. Character creation takes only a few minutes. Combat is brutal and death is always on the horizon.

Email ThisBlogThis!Share to TwitterShare to FacebookShare to Pinterest
Labels: far away land, kickstarter