Its March and that means the annual GM's Sale at RPGNow. I'll be putting together a series of Tavern OSR Picks for this year's sale (although a pick or two may stray from those OSR parameters). This is Part 2. Part 1 is here.

Today is Classic TSR Picks, some of which are very fairly priced.

D&D Rules Cyclopedia - "The Cyclopedia contains the compete game system and hundreds of features, including the following: All the rules from the D&D boxed set series, including Basic, Expert, Companion, and Masters, Guidelines to develop and play characters from levels 1-36, Comprehensive lists of weaponry and equipment, Expansion rules including optional skills and talents, an overview of the Known World and the HOLLOW WORLD game setting, the official D&D campaign world; and Rules to convert D&D games and characters into AD&D 2nd edition game statistics and back again." 9.99  6.69 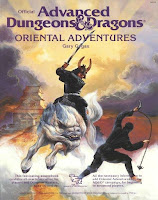 AD&D game as you've never played it before. In the lands of Oriental Adventures, characters are not judged solely on their prowess with sword and spell. Oriental characters' social skills and personal honor are just as important as their combat abilities. When was the last time politeness and proper manners really mattered in your campaign? How can characters associate with nobility if they know nothing of courts or court etiquette? How many AD&D characters worry about how their actions reflect upon their families and comrades? These and many other intricacies of social interactions and responsibilities are brought to light in this volume."  4.99  3.34

Kara-Tur: The Eastern Realms - "This contains everything AD&D game players and DM's need to establish an exciting Oriental Adventures campaign! 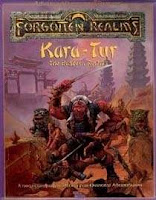 Kara-Tur, world of eastern mystery, is on the far side of the planet from the Forgotten Realms Campaign setting, but the two cultures interact only if you want them to! This is the "official" campaign setting for the Oriental Adventures rulebook. Kara-Tur has everything you need: Two 96-page books describe the places, culture, politics, monsters, magic, people, religions, and more, plus advice on running a long-term Oriental Adventures campaign, bringing characters from other worlds into Kara-Tur to other worlds." 4.99  3.34

World Builder's Guidebook - "Get out your pencils and markers, because it's time to make that dream come true! From the first steps of picking a campaign book to the final details of crafting a kingdom or city, World Builder's Guidebook leads you stage by stage through the process of creating your own, unique campaign world. Build a world modeled after your favorite movies or books, detail a portion of an existing world, or create your own fantasy world from scratch! Some of the features you'll find in the World Builder's Guidebook include: An introduction to the art of world building, Guidelines and random tables for creating continents, kingdoms, societies, local areas, towns and cities, ecologies, pantheons, histories, and sites of interest, A pad of 32 copyable forms, mapping paper, and hex sheets?an indispensable set of tools for your world-building efforts!" 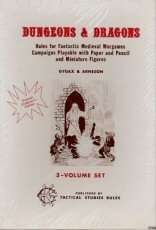 OD&D Dungeons & Dragons Original Edition - "First published in January 1974, the original edition rules of Dungeons & Dragons would go on to see six different printings. This edition is for the Original Collector's Edition released By Wizards of the Coast in 2013, which was itself a revision of the 6th and final printing, the "Original Collector’s Edition" or white box edition. You get all three books contained in the original boxed set:
Men & Magic, Monsters & Treasure, and Underworld
& Wilderness Adventures plus the Reference Sheets booklet." 9.99  6.69 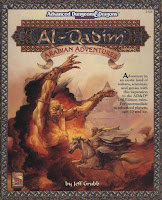 Al-Qadim: Arabian Adventures (2e) - "Magic carpets, ghoulish vixens, genies rising from the sand in a whirlwind of smoke and fire - such wonders, spun into tales by fabled Scheherasade, enchanted a king for a thousand and one nights. The Al-Qadim campaign will enchant role-players for a thousand and one more.
You are about to discover an exotic realm inspired by the tales of Sinbad, Ali Baba, and other classics from the Arabian Nights. The first in a series of products, this volume features everything DM's and players need to launch the Al-Qadim campaign."  4.99  3.34 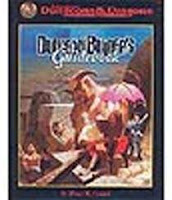 Dungeon Builder's Guidebook - "What if you already design all your own dungeons? Though the advice and tips in here and may be old news to you, even the most experienced Dungeon Master is sometimes strapped for time or inspiration. Dungeon Builder's Guidebook is perfect for generating the dungeon hook you need at a moment's notice, the goblin warren the PCs accidentally stumble upon, or the pocket dimension you did not get a chance to detail.  Dungeon Builder's Guidebook contains the following features: Basic pointers and advice on building dungeons. Permutations that provide ways to " twist" your dungeon in exciting ways. Six distinct dungeon types, each accompanied by property and encounter tables to help your flesh out your dungeon. A collection of 78 geomorphs that you can photocopy, trace, or freehand onto your own maps. The Trap Architect, at detailed process for generating lethal traps. The Autodungeon Engine, a series of tables that allow your to create a dungeon by attaching random geomorphs together, forming a unique dungeon each time." 4.99  3.34

Wizard's Spell Compendium Vol. 1 - "The Ultimate Collection! The Wizard's Spell Compendium is a four-volume series describing every wizard spell for the AD&D game. Spells have been collected from rule books, campaign settings, supplements, adventures, and magazines dating back to 1975. Early entries have been updated to be immediately usable, making this the player's and DM's definitive source for wizard spells." Also Volume 2  9.99  6.69

There are affiliate links above. Help keep the lights on at The Tavern.
Posted by Tenkar at 6:42 PM