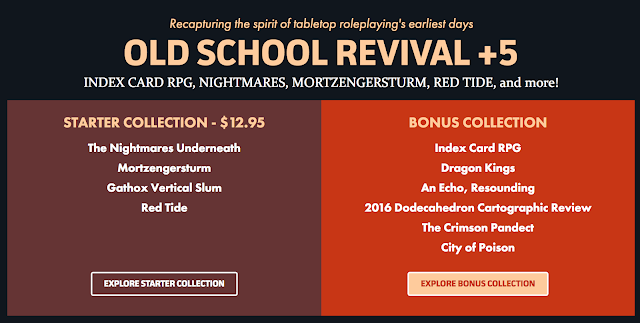 Yeah, I'm a bit late on sharing this but I'm still in catch up mode. Maybe I need to bring my laptop to the booth next con so I can get some extra blogging in ;)

Anyhow, we now have the Old School Revival + 5 Bundle of Holding. The starter collection is $12.95 and what do you get?


So, the Starter Collection has two solid pieces and two I can't really comment on as I never came across them prior. Which means I don't have two parts of the Start Collection.

What about the Bonus Collection (currently at $25.55)?


Very much a mixed bag. I you have none of the above, the value is good even with some potential misses. If you have more than two or three listed above, you might be digging a bit deep to find value. That being said, Dragon-Kings and The Crimson Pandect alone might make this worth my purchase.
Posted by Tenkar at 12:10 PM