NTRPG Con - There and Back Again - and Better than EVER! 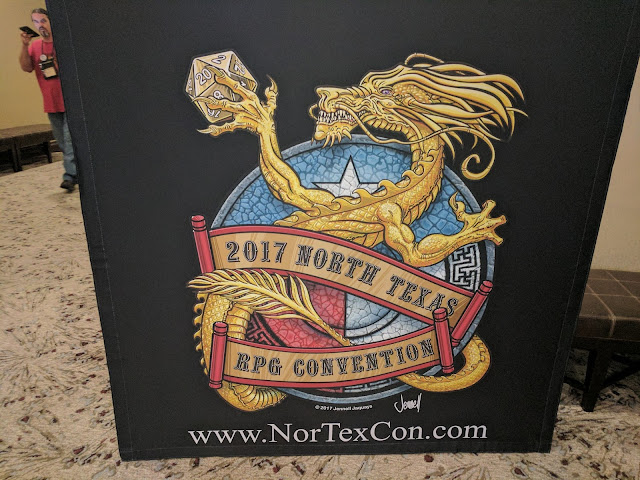 Rach and i arrived home earlier today. Unlike the flights that were canceled last night for others, our noon flight to LGA was delayed all but 10 minutes and still arrived on time. I am glad to be home but I'm already making plans for next year's NTRPG Con.

If for some reason you have not attended NTRPG Con, all I can say is "WTF dude (or dudette)!?!"

I was nervous that the new hotel (DFW Airport Westin) wouldn't be able to stand up to the Marriott (old venue) - I needn't have worried.  Where as the old venue had reached its physical limits, the new venue has space to grow AND maintain room for open gaming. The halls are nice and wide and allow for folks to stop for conversations without blocking others. I never knew how important this was until now. Holy shit but this is important.

I saw a lot of new faces at the con and many repeat offenders. I was happy to chat with all. Hell, if you stopped to chat with me you probably found me hard to shut up. I apologize after the fact ;)

I talked with Bad Mike on some ideas for improvement but most were already in the works for next year. Did I mention they've already signed for next year?

I really enjoyed myself at Gary Con and I'm looking forward to Gamehole Con, but if you really want an opportunity to talk with, not just shake a hand and move on, the old guard or the up and coming new guard of the OSR community, NTRPG Con is the place to be.

This was the fourth year in a row for Rach and I. By Friday afternoon of our first NTRPG, Rach was telling Mike we WERE coming back next year. My amazing wife is not a gamer by her usual nature, but ask anyone that has run a session with Rach - she becomes a bloodthirsty gaming demon when you give her dice at NTRPG Con. There literally can be no stronger endorsement :)