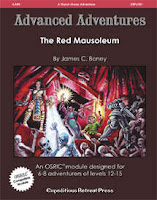 Expeditious Retreat Press is offering a bundle of OSRIC Adventures from their Advanced Adventures line - 8 adventures in PDF for $10 bucks. At that price it's hard to go wrong. So, what's in the bundle you might ask?

The Lost Keys of Solitude is an OSRIC(TM) module designed for 6-8 adventurers of levels 6-10.

While traveling through the foothills of the Garvain Mountains, your party found refuge for the night in a hermit's cave. In the morning, you wake to find the hermit and all his possessions gone, all except for two golden tiles: one embossed with the image of a bull with his hrons down and ready to charge, the other a tiger poised and ready to pounce. When the tiles are placed next to each other so that the bull and tiger face one another, the embossed images move, fusing the two pieces into one. The newly created image is the bull and tiger locked in combat. The fused piece is easily separated, and when separated, the images of the bull and tiger return to norm...

Stonesky Delve is An OSRIC(tm) module designed for 6-10 adventures of levels 4-7.

Giant Stonesky Mountain has been a spiritual home for the Dwarves since the first clan received the 4 Pillars of the Underearth from Motsognir. The voice of the dwarven deity purified the halls and caves under Stonesky and the mountain has been a sanctified place for all the various dwarven peoples. And now, as lamentable dwarven internal conflicts rage on, a new entrance into the Stonesky has prompted an exploratory party. Unwilling to send his own into the dark hole when they are so desperately needed elsewhere, the local Hlaford's hired you for your delving expertise. Your mission - enter, explore, map, and do not return to the surface until the passing of three days!

The Frozen Wave Satsuma is An OSRIC(tm) module designed for 6-8 adventures of levels 3-5.

A bank of frigid fog rolls down the northern coasts, bringing seaborne raiders sacking villages and temples along the way. Survivors wail of strange-speaking men in stranger armor, wielding weapons unseen in civilized lands. All know that the fog must hide a larger ship of some equally strange design, for the raiders strike from small boats which would surely capsize in the open seas.

What dangers await upon the cold and windy ocean? What terrible foreign ship lurks within the haze, hiding like a lion upon the wine-dark sea? Into this fog travels the intrepid party - seeking to solve the mystery of The Frozen Wave Satsuma!

The Riddle of Anadi is an OSRIC(tm) module designed for 5-7 adventures of levels 6-10.

The ancient name of Anadi is legendary among sages, mystics, and wizards throughout the land. It was the Great Sage herself who researched countless magical rituals and spells commonly used today. Yet none know what ultimately became of Anadi; rumors abound that she ascended to godhood, she was enslaved by some demon of the nether planes, or that she simply died and is buried in some long forgotten location.

The Obsidian Sands of Syncrates is an OSRIC(tm) module designed for 6-10 adventures of levels 4-7. It was the tournament adventure at GenCon Indy 2011.

Returning from a successful trading voyage to far-away lands, the party's ship is stranded in the doldrums. After two days without any wind, the sky darkens and small particles of black ash fall like a dark snow. The party's two native guide-translators panic and begin wildly yelling, quickly whipping themselves into a fury of fear. Faster than the group can react, the two guides pull their small knives and stab themselves in the chest repeatedly as they jump over the side of the ship...

Redtooth Ridge is an OSRIC(tm) module designed for 6-10 adventurers of levels 1-3.The plain wooden cup the dryad Aralina needs for her great oak’s rebirth has been stolen by creeping foul things! Small, man-like, creatures with great heads assaulted her and, in the confusion, pick-pocketed the cup before fleeing towards Redtooth Ridge. Without her cup, her tree with die before it can reproduce and she will die with it. In her distress, she has offered a reward of a beautiful coral necklace in exchange for her plain wooden cup. The call has gone out and surely a party exists willing to assault Redtooth Ridge?

The Red Mausoleum: The populated regions north of the Sistermoors have enjoyed over a century of respite from the wars that once plagued the area. However, within the past year, baronial patrols have reported clashes with undead and other dark creatures brave enough to strike out from the moors into the forests of men and elves. The Baron’s sage suspects that the undead issue out of the mysterious ancient landmark known as the Red Mausoleum located somewhere on the wild stretches of the moors!

The Seven Shrines of Nav'k-Qar is An OSRIC(tm) module designed for 6-8 adventurers of levels 8-12.

Nav'k-Qar! A name lost to antiquities and feared only by scholars who know of the dread toad god's former power... once surrounded by a cult which performed the most vile and evil acts in his honor. Now that all of his followers are long dead and the temples of the Gray One completely destroyed, the final resting place of the cult's last riches has been a source of speculation for generations. At long last, one scholar discovered the location of that elusive shrine, the greatest one of all... the fabled Seven Shrines!

Do you have the strength, knowledge and skill to penetrate the horrors of that dread place and wrest the vast treasure from the jaws of the Gray One himself?

Remember, your use of The Tavern's affiliate links helps keep the candles burning and the taps flowing at The Tavern. As always, we thank you.
Posted by Tenkar at 12:37 AM