+James Raggi 's Random Esoteric Creature Generator for Classic Fantasy Role-Playing Games and their Modern Simulacra is a mouthful. It is ALSO extremely useful and full of inspiration when you want that "special" creature to entertain your players (and gives some insight into LotFP Weird Fantasy rules). 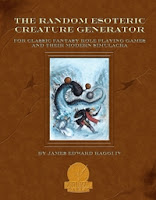 Looking to instill a little fear in your game? Then look no further! Nothing brings the thrill – and terror – of discovery to a game like new monsters. Faced with the unknown, mighty-thewed heroes tremble in their hauberks, wizened wizards fumble with their spell books, and even the most audacious of rogues hesitate before plunging into battle. Nevermore worry that your players have memorized every monster’s stat, power and weakness. Nevermore resort to tired fantasy clichés, and worn out monsters fought a thousand times before. The Random Esoteric Creature Generator ensures that each monster your PCs cross is unique, unexpected, and best of all – unknown. With an unlimited number of horrific combinations, this is the last monster book you will ever need. Bring terror back to the table with the Random Esoteric Creature Generator!

Dark Times in Brighton - An adventure and a town designed for Labyrinth Lord, but really for the OSR ruleset of your preference. Who doesn't need a town for his or her players to be based in?


Dark Times in Brighton is an adventure for four to six characters of 1st - 2nd level. Although designed as a Labyrinth LordTM compatible product, It is easily compatible with most fantasy RPG systems.  In addition to the adventure itself, contained within these pages are details of Brighton and its people, a town that could easily become an important part of your character's careers as adventurers. 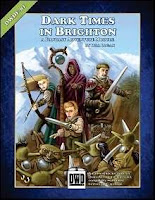 The town of Brighton exists in the north, at the source of the Daakencraags where the Darkenwolde Forest shades the winding Brother’s River. The legendary adventurer, Richan Thatcher (along with his party of adventurers) carved the place away from a once mighty goblin kingdom. It has prospered for many long decades, until now. Townsfolk are disappearing from the surrounding countryside. Goblins are on the march once more. If that wasn’t enough, a terrible blighting disease has infected the waters and not even the curative magics of the Temple of the Winds can thwart it. This is indeed a very dark time for Brighton. Too old to do anything about it himself, Thatcher has sent out a call to any adventurers who will swear their swords to his mighty town and its innocent people.

Misty Isles of the Eld - Dude, its got a meth-fruit plantation house! Heh. I was given a print copy of this at last year's NTRPG Con. It was a trip to flip through on the flight home ;)

Come visit the acid fantasy mini-sandbox of the Misty Isles, a hellish pocket plane that's brutally displaced a bucolic paradise. Marvel at its massive grub-ridges, shake at the body horror of its protein vats—and watch as your players dynamically unleash the Anti-Chaos Index through their own in-game actions. Misty Isles of the Eld is a stand-alone sequel to Slumbering Ursine Dunes and Fever-Dreaming Marlinko.

What's inside its 104 pages:
-Four dungeons. The Vat Complex (with its menacing sealed off-west wing, body-horrific industrial process and pocket dimensions), the flying god-prison Monument Five, the meth-fruit Plantation House and Colonel Zogg's Pagoda Bunker.
-Full “extra-planar” pointcrawl. The wilderness crawl spreads over one main isle and two smaller islets subdivided by massive, movable grubs.
-An “Anti-Chaos Index.” Through their actions the players shape the very reality of the Isles. Sometimes for the better, sometimes for the worst, but always for the weird.
-A slew of new otherwordly monsters.
-A large collection of bizarre technological Eldish artifacts and treasure. Includes a random generator for miscellaneous artifacts picked up.
-A new psionicist player class, the Psychonaut, with a soft scifi twist. Including its own powers and mutations.                                          $12.00  $10.20


Remember, your use of The Tavern's affiliate links helps keep the candles burning and the taps flowing at The Tavern. As always, we thank you.