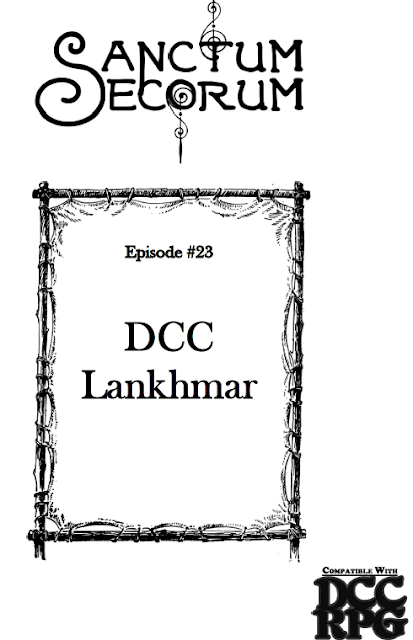 I know I've mentioned this before, but I find that I'm listening to less podcasts now that I'm retired. Lack of a daily commute appears to be the main culprit. Ah well, I'll try to rectify that in the near future - not the retirement and lack of commute part, I mean I'm going to carve out some more time devoted to podcast listening.

Literally, as I type this, I'm listening to Sanctum Secorum episode #23, the DCC RPG Lankhmar episode. In addition to the regular hosts (Bob, Jen and Mark) and special guest Michael Curtis, the main author of the DCC RPG Lankhmar Kickstarter. Maybe its just me, but Mike always makes a great guest on podcasts. He knows his subject and can speak of it in an entertaining manner.

That's not all. In addition to the podcast, the Sanctum Secorum folks released support material for Lankhmar in conjunction with this episode. You can download the free PDF detailing an entire neighborhood of Lankhmar here.

Alright, time to move the portable podcast to the car as I pick Rach up from yoga. Too short for a "commute" but I'll be playing catch up soon ;)