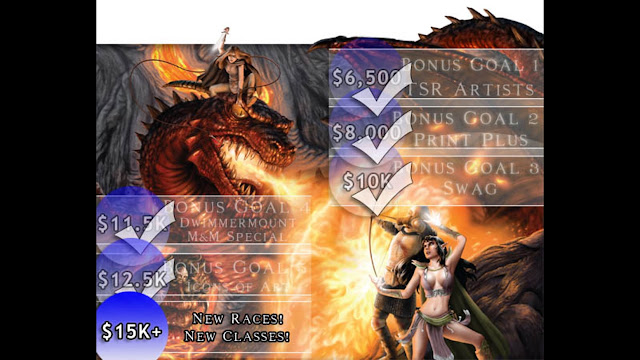 Ah, Myth & Magic. How I despise you. Tom Ryan, alleged liar and alleged tax attorney and proven asshole is still stringing folks along. Because so long as you do what? Yearly updates? Somehow you are fulfilling your obligations.

Tom, the man who posted my shipping info in the comments of the Myth & Magic Player's Guide Kickstarter. BTW, that isn't "allegedly", he did so. I had to reach out to Kickstarter to have it removed.

Because, you know, Tom claimed to have shipped ALL of the Player's Guides, but many backers are still waiting and those that ordered multiple copies got but a fraction of what they paid for. Again, facts, not allegations.

I expected my copy to arrive urine soaked. Fact, it arrived fine. Color me surprised.

So, what does Tom do? He updates the M&M Gamemaster's Guide KS. That's the one where no one has gotten shit. Again, fact, not allegation. First update in nearly 13 months. Backers only, so I can't read it but something tells me it says something to the effect: "Soon! I promise!"

Tom, in my personal opinion, you are a (alleged) thief, (alleged) liar and nearly 5 years late on getting the M&M Player's Guide in the hands of people that gave you good money.

Tom, today is Good Friday and Sunday is Easter. Are you joining Gareth and Ken at the Church of the Deception for services? Inquiring minds want to know...
Posted by Tenkar at 3:48 PM