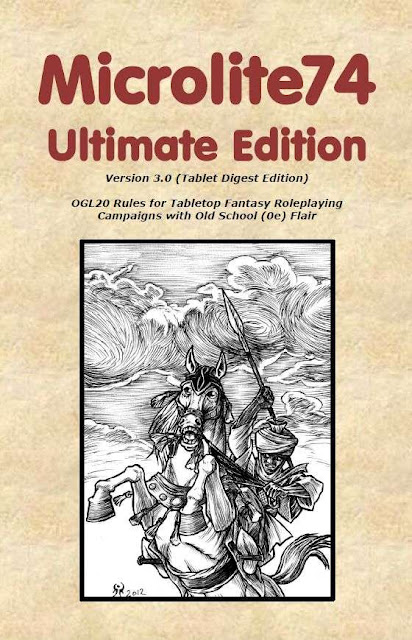 Its always nice to see games with the Old School vibe hang tough in the RPGNow sales rankings (currently sitting at #5 overall) Right now, that would be Microlite74 Ultimate Edition (PDF and EPUB versions) Now, Microlite74 and its various versions are an interesting experiment in sticking close to the 3x SRD while trying to stay true to the feel of the original rules. How well it does that is a matter of personal opinion. Suffice to say, Microlite74 Basic was one of my inspirations when I put together Swords & Wizardry Light - its not easy taking the 3x SRD down to 20 pages, which ML74 Basic did.

Microlite74 comes in three other flavors - Basic, Standard and Extended. All are PWTW, so you can peek before plunking 10 bucks down for the Ultimate Edition.

From the Extended Rules blurb:


The Microlite74 Extended rules are based on the 1974 0e edition of the world’s most popular fantasy roleplaying game with its supplements and material from 0e magazine articles, some 0e third party material, some of the house rules the author used in the 1970s, and selected ideas from other roleplaying games. These rules are not intended to be a clone of the 0e rules, but rather a conversion of them to a rules-lite D20-based system that encourages old-school play without strictly old-school rules.