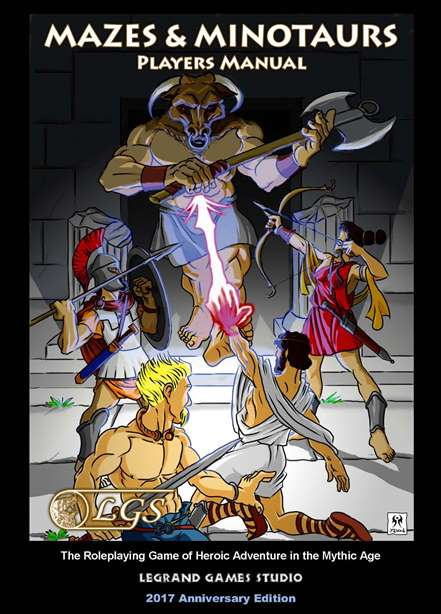 You know about Mazes & Minotaurs, right? The game that never was, but in an alternate reality was D&D before D&D?

Well, its available at RPGNow for the price of FREE.

Even if you would never run the rules as is, the monster book alone is worth the download to add options to the OSR system of your choice


Mazes & Minotaurs is what the first fantasy roleplaying game could have been if its authors had taken their inspiration from Jason & the Argonauts (yes, the 1963 movie with all the cool Ray Harryhausen monsters) and Homer’s Odyssey rather than from Tolkien’s The Lord of the Rings or Poul Anderson’s Three Hearts & Three Lions.
In other words, Mazes & Minotaurs is:

And EVERYTHING IS FREE!  That’s right: every rulebook, every supplement, every Mazes & Minotaurs product is 100% FREE.

In its own alternate continuum, MAZES & MINOTAURS was the first RPG ever designed and came out in 1972 * to be followed, 15 years later, by its glorious Revised rules (presented, of course, in three corebooks) – which are now available in a special, 30th Anniversary edition, from DrivethruRPG!