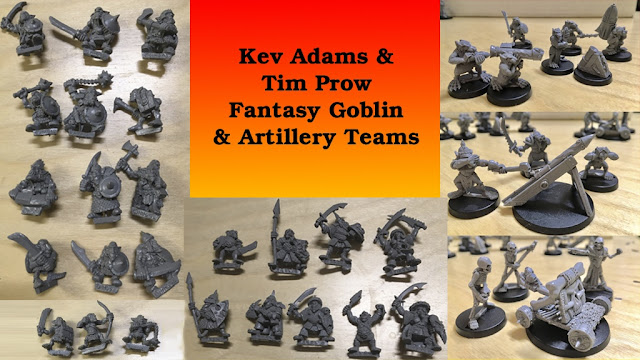 My love for miniatures knows no bounds. Sadly, my skill at painting such is greatly limited. Still, lack of skill does not preclude me from enjoying said miniatures in their native state.

Actually, the above screenshot doesn't do the detailing justice.

I love the expressions on their face. THAT is detail.

So, what's the background to all of this?

Kev Adams, Tim Prow, Chaz Elliot and Phil Lewis are names that immediately invoke images of the old school style fantasy miniatures commonly referred to as Oldhammer. Heartbreaker produced many classic fantasy miniatures sculpted by these legends during the 1990s before going out of business. When Heartbreaker closed, Chris Bledsoe was given the masters for the miniatures line so that he could start his own company ZN Games in 2001. Unfortunately Chris passed away from cancer in 2002 and his goal of re-releasing the Heartbreaker line of fantasy was never achieved.

Impact! Miniatures has been working with the estate of Chris Bledsoe to complete his goal of returning these classic Oldhammer style sculpts to the marketplace. We could not think of a better place to start than with hordes of Goblins.

WHAT ARE YOU FUNDING

The project goal when reached will fund all the costs needed to mold the old masters and bring the first 3 Heartbreaker product lines selected (Kev Adams Goblins, Tim Prow Goblins and Fantasy Artillery Team) back to market.

The Kickstarter went live yesterday and has already more than doubled its modest funding goal. Stretch goals unlock further sets. Personally, I'd like to see Phil Lewis Knights & Wizards (22 miniatures) unlock, but I'm not trying to skew the voting or anything ;)
Posted by Tenkar at 10:11 AM