Beneath the Battered Dwarf Tavern - Playtest Recap - Are You Laughing at Me?!? (Part 2) 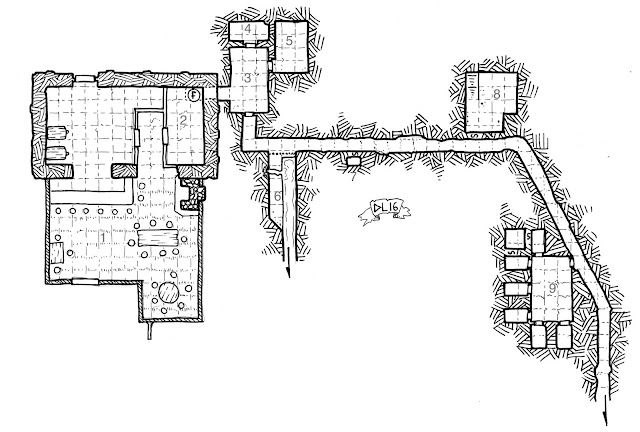 So, Saturday night we got the old group back together, more or less, and kicked off the new Swords & Wizardry Light campaign with a playtest of Beneath the Battered Dwarf Tavern, a SWL Introductory Adventure. I also allowed the use of any of the classes currently written for the SWL expansion, but everyone initially stuck to the four core races.

This is part Two of the playtest recap. Part One is here.

Where were we? Oh yes, we were here:

The party was just north of the secret door at Room 7. The Cave Otter was charging from Room 6. The party's cleric still had the key to the gate in his pocket. Someone, somewhere was laughing.

Blows were exchanged and finally the party fought off the Cave Otter and it retreated downstream of room 6. Deciding to grab the ale while they were where the ale was, the party again locked the gate upon leaving.

Returning to Room 3, they decide to confront whatever is left of the Giant Rats in Room 3. Five emaciated Giant Rats swarm the party. A good fight is fought but the magic-user falls under the onslaught. He doesn't have much worth looting, but the party does fine a silver chain in the rats nest.

The party thief decides to open a sack of flower and spread its contents along the souther end of Room number 3. If there is something watching them, perhaps invisibly, he wants proof. He also fills a small sack with flour to take with him.

The ale is brought up, along with the nibbled on body of their deceased brethren. They tell the barkeep that there is some kind of poltergeist in his basement. He demands they put an end to it. They demand a part ownership of the tavern. They haggle a bit, a deal is struck and the young dwarf receives the angry ire of his uncle.

A bard joins the party (maybe 5 minutes to create the character) and they rest overnight.

Returning to the basement the party finds tracks in the flour laid out on the floor. Vaguely humanoid tracks. They follow the tracks south of Room # 3, turn east, past Room # 6 before the tracks literally stop in the corridor - well, in the south wall - just north of Room # 7. Suspecting they have found a secret door, they search for the mechanism - they find it and open the door.

There is a small room, unoccupied, which can't be right. The thief throws in the flour, and sure enough, there is a short, humanoid creature hiding in the corner, After a short fight, it surrenders.

"I just having fun! No, your friend dying was not fun, but watching the fight was! Watching you scare of that creature was great fun! It was great fun watching your dinner the other night!"

Not sure what they have (and with the party's fighter eager to kill it) they tie it up tightly and try to elicit more information from it.

"Treasure I know! Yes, treasure. Take you I can, great fun!"

He leads the party to Room # 8. He reveals the secret door and tells them that great treasures await behind the door. When asked about any danger, the response is "What is treasure without danger? One brings value to the other. Great fun!"

Opening the door reveals a room full of wooden and stone coffins as well as a half dozen undead. The cleric turns them successfully, and they try to flee up the stairs, but that entrance had collapsed year ago. They do a quick search, find some valuables and close the door behind them.

"See! Treasure as I said!" the creature tells the party proudly. "Not great fun, but treasure, yes? I bring you more treasure?"

The passageway turned mostly south and the party follows it until they encounter a door on the west wall. The door had been painted at some time in the past, but now most of the paint had flaked off.

The party opens the door and enters Room # 9. It has many doors and appears to have been a place of worship in years in the past. The cleric racks his brain, trying to determine if he knows anything about this religion (I ask him to roll under or equal to his Wisdom - he does) He's not sure the name of the cult, but they worshipped demons as if they were gods. Its at this point that the party notices that their captive's wounds are healing before their eyes. The decide to quickly back out of the room and discuss their options.

Thus ended the playtest of Beneath The Battered Dwarf Tavern.
Posted by Tenkar at 8:09 PM