There's a 1st Print - Woodgrain - Original Dungeons & Dragons Boxed Set for Sale on Ebay - Brother, Can I Have $5k? 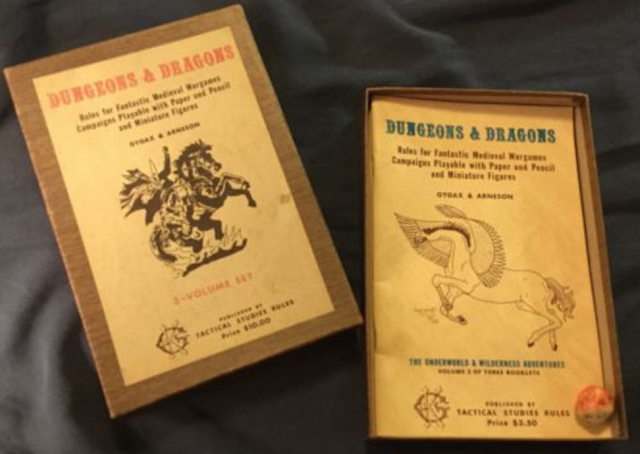 Woodgrain Dungeons & Dragons boxed sets don't pop up for sale to often. Sadly, I don't usually pay much attention, as the prices are quickly out of my range. This is by far out of my price range but the story behind this box is a good one:


Statement from the owner:

This set is in Very Fine condition with one small stain on the front label and very minor scuffing on the corners of the box. Note that the Reference Sheets are not stapled, but loose sheets folded together. This was the original condition.

It was acquired by the present owner in an interesting way.

In 1974 I worked in a project offering supplemental educational materials to four school districts in Northwestern Wisconsin. I met Bill, an elementary school librarian, who was very excited about working with his students using role playing games. He had a friend in Minneapolis whom he had met through their shared interest in war gaming. This friend, “Lance,” was involved with creating a new project, a fantasy-style wargame in a box that could be played by anyone.

My librarian friend was working with a sixth-grade class to create a book based on playing the game. Included in this set is a copy of the booklet that his students created using the game.

Bill also used a 20-sided die that he had hand-colored to differentiate scoring. Adding to the charm of this set, the die is included, as is a hand-written note from Bill, the librarian, explaining the use of the die. He added that there was currently a shortage of these dice, but they were available in England. He was going to England for a vacation, and would be bringing some back with him. 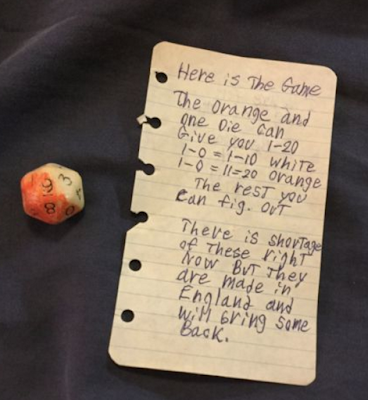 Probably not a bad price, all things considered, but I'll have to be satisfied with my 2 OCE White Boxes ;)