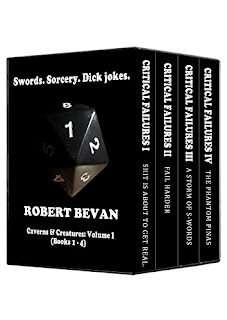 See what it says on the faux cover of Caverns and Creatures Volume 1? Swords. Sorcery. Dick Jokes.

Well, it delivers on all three.

I'm trying to think of what series of books I could compare this to. I guess Joel Rosenberg's Guardians of the Flame, but without the harsh reality and with the harsh dick jokes.

I must admit, reading this in bed I woke Rach up a number of times with my chortling, snorting and outright giggling. I finished the first book and I'm about a third of the way through the second. I assume the jokes will go stale at some point but there are a ton of books in the series.

The writing is special, but the situations and the jokes are.

And the vast majority are free if you have Kindle Unlimited.

It's a fast, enjoyable read and it's pretty obvious the characters were playing D&D before it all goes south on them.

One minute, they're drinking away the dreariness of their lives, escaping into a fantasy game and laughing their asses off. The next minute, they're in a horse-drawn cart surrounded by soldiers pointing crossbows at them.

Tim now has the voice and physique of a prepubescent girl. Dave finds that while he lost a foot or two in height, he somehow acquired a suit of armor and a badass beard. Julian's ears have grown ridiculously long and pointy. And Cooper... well Cooper has gotten himself a set of tusks, a pair of clawed hands, and a bad case of the shits. He also finds that he's carrying a bag with a human head in it - a head that he had chopped off when they were still just playing a game.

Shit just got real, and if they want to survive, these four friends are going to have to tap into some baser instincts they didn't even know existed in their fast-food and pizza delivery world.

It's fight, flight, or try to convince the people who are trying to kill them that they don't really exist.

Meanwhile, a sadistic game master sits back in the real world eating their fried chicken.

Remember, all purchases using Amazon affiliate links puts some kinda % of your purchase price into The Tavern's coffers. Don't leave that money on the table for the greedy corps! Tip your barman!  ;)