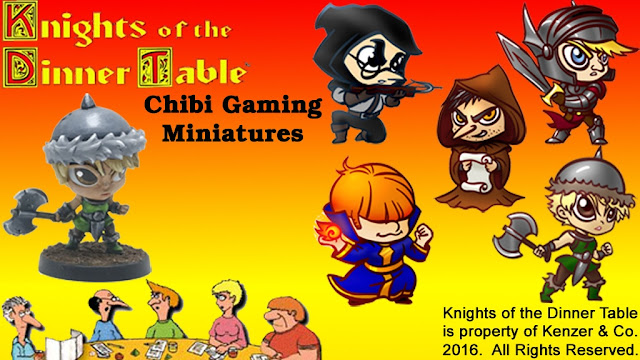 I'm a long time fan of the Knights of the Dinner Table going all the way back to Shadis Magazine. Yes, I'm showing my age? So what! heh

So when Tom Anders of Impact Miniatures told me he was going to be producing licensed Knights of the Dinner Table Chibi Gaming Miniatures, you know I was interested.

Here's the story behind the project, as relayed to me by Tom himself and posted on the KS page:


Because of my love for KODT, I was an eager backer of the KODT: LAS KickStarter. I have been a bit horrified to see Jolly Blackburn's wonderful IP left in the dust of this KickStarter gone off the tracks. This upset me for several reasons. 1) Jolly is a great individual and known benefactor of the gaming community. 2) KickStarter is a major investment tool of my company and when one goes badly in the fantasy/gaming realm it means my possible future backers might not want to back another KickStarter and 3) The Creator has been regularly abusing the backers.

As a result of all this ... I've done what I could to help. I've helped get data on the backers to assist verifying claims by the Creator. When it was revealed he had sold backer rewards to a retail outlet instead of sending them to the backers, I sent free product to the retail outlet that they could sell to cover the cost of shipping those items as rewards to the backers who should have received them.

During all of this, I mentioned to Jolly in July 2015 that I would love to run a KickStarter with the KODT IP so that I could give him what I believe would be a very positive experience with a KickStarter of his licensed IP. Jolly let me know he was not against trying another KODT KickStarter with the focus on making miniatures for the KODT characters. This led to a year of conversations about what would the design of the miniatures would be, art proof of concepts for approval and even a Kenzer & Co employee sucking on a prototype model at Gen Con 2016 to try and figure out what chemicals were in the model when Jolly wondered. All events leading to a license contract signed on September 26, 2016 to bring you this project!

Now, we all know who the unnamed project creator is. I won't sully this KS by mentioning his name.

The sweet spot of the KODT Chibi Fantasy Miniatures KS is $24, which gets you the original 5 characters Unless you want more, cause sometimes more is better ;) If you back in the first 24 hours (it just launched this morning) you get 2 add on minis for free. What's your selection?