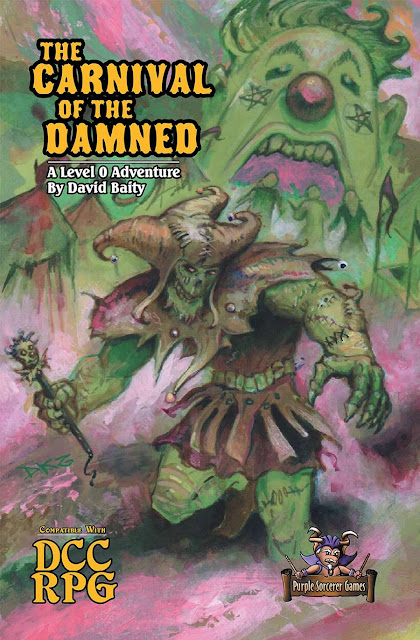 First, let me apologize to +Jon Marr and +David Baity . Jon put a prerelease copy of The Carnival of the Damned in my virtual hands in early January and I never got around to reviewing it. The last few months were certainly hectic, but now that time is slowly becoming my friend, Ive been playing catch up. Which is where we are at right now ;) 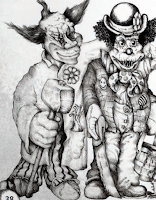 The Carnival of the Damned can be played either as a Tournament adventure, in which case players play until their character dies and then a new player jumps in OR as a 0-level funnel. If used as a funnel, it has the ability to be used multiple times, as you'll probably only use a half dozen or so of the encounters (and maybe one or two of the random encounters) in a session. As you can see already, you get lots of gaming material for your money.

Now obviously, if there's a carnival, there has to be clowns. And when I think of evil clowns, Killer Klowns from Outer Space comes to mind. So, sidetracked. Anyhow, the artwork in CoD isn't the cute but disturbing art that Jon Marr is known for and that's because Jonn didn't do the art in this one. +Doug Kovacs did the cover and David Baity, Todd McGowan, Danny Prescott, Stan Reed, Simon Todd did the interiors and what interiors they are.

Right. Encounters. There's a gawd damn Whack-A-Mole encounter. How awesome is that? More awesome than you can imagine, but I'm not giving it away. Yep, even a Petting Zoo. Bet you won't see what's coming in this encounter. Heck, you wont see what've coming in nearly all the encounters.
They aren't curve balls and they make their own kinda sense, but your players won't find themselves in familiar territory.

If you are running this for your home group, once the 0-level survivors reach 1st level you could easily keep the Carnival running for another session or three. In it's own way, it's a contained sandbox and there is a mystery for the PCs to solve (and souls to save - maybe even their own). If I get a chance to run this, it's how I would want things to work out. Multiple sessions with the group whittling down and the survivors getting enough experience (a level or two) to solve the mystery.

Which is a great thing about The Carnival of the Damned. There's a ton of fun content. It would be a shame not to get the most out of it.

Oh, before I forget to mention it again. The art. Flat out awesome.
Posted by Tenkar at 12:15 PM