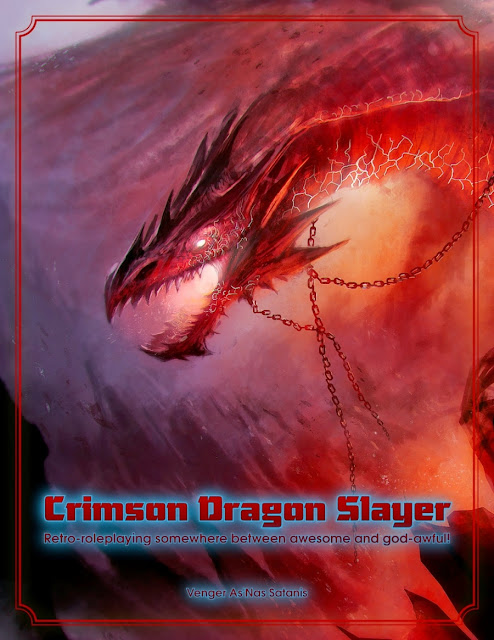 +Venger Satanis ' Crimson Dragon Slayer is today's Deal of the Day at RPGNow, discounted from $7 in PDF to $4.20

What is Crimson Dragon Slayer?


This is my (Venger) own contribution to the OSR / fantasy heartbreaker genere of paper & pencil roleplaying games.  Crimson Dragon Slayer is heavily inspired by the 1980's.

The parts of it that are god-awful are god-awful on purpose (mostly).  Your adventuring party might contain a robot ranger with laser sword, infernal elf wizard with machine gun, and crystalline / pixie fairy princess hybrid brandishing a two-handed dagger, all tooling around in a Mel Gibson interceptor... looking for cyber crowns, magic items, and bodacious bimbos.  Can you bring Lord Varkon down before his crimson dragons rip Thule a new one?

So, what's in it?  A self-contained system that's not d20, yet mostly compatible with the original fantasy roleplaying game and all the clones published since.  You roll multiple d6s, the higher the better, relying on improvisation more than defacto results.  There are several classes and many races to choose from.  Also, strange yet eerily familar spells, magic items, monsters, and the mother of all name generators!

If all goes well, it will be like pretending you're a wizard or warrior in the backyard waving a stick around as if it was a staff or sword... put a tattered red sweatervest on the dog, maybe he can be the dragon.

There's also an introductory adventure at the end featuring all-too-familiar 80's film characters, several arcade game monsters, and stuff that Lovecraft was too ashamed to write about.