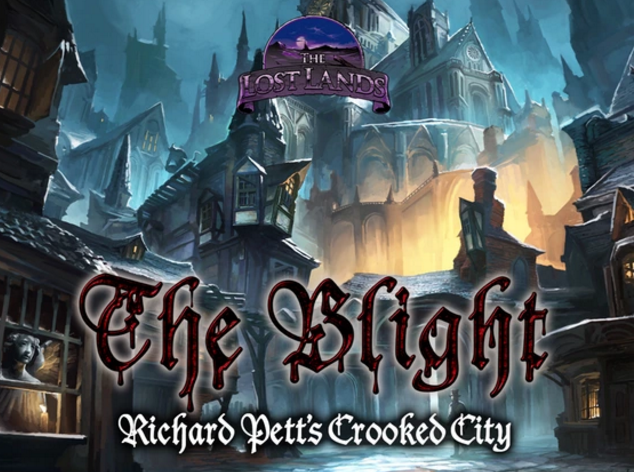 You know how The Lost Lands: Borderland Provinces Kickstarter was billed as Frog God at an affordable price?

Forget all that. It's done and over.

The Lost Lands: The Blight - Richard Pett's Crooked City is clocking in at 900 pages (I believe that is the Pathfinder version page count, Swords & Wizardry should be a bit shorter)

Yep, you know that is going to cost.

It's also a long ticking Kickstarter with 55 days left on the clock as I type this.

A friend of mine termed The Blight as "Planescape meets Ravenloft"

Just don't drop it, you may break a foot.

What exactly is The Blight, you ask? The Blight is a lot of different things to a lot of people. At its most basic level, it is the next portion of the Lost Lands campaign setting to be revealed by Frog God Games, a darkly medieval, urban horror setting that crouches on the western coast of Akados far from the other lands revealed in the Lost Lands so far--an ugly, misshapen twin who glares across the continent at its sibling on the opposite side with envy and hatred in its eyes...and not a little bit of madness.

The Blight is a mega-campaign book and adventure path along the lines of Frog God Games releases like Sword of Air, The Slumbering Tsar Saga, The Northlands Saga Complete, and Cults of the Sundered Kingdoms. And like those books it includes both a vast compendium of gazetteer information about the area it covers as well as adventure, adventure, adventure!! Clocking in at over 550,000 words, The Blight is also the single-largest print product ever produced by Frog God Games...surpassing even the might of the The Slumbering Tsar Saga in its magnitude. Though it has not been through layout yet, so that a page count is an estimate at best, we anticipate that this book will be at or around 900 pages in length.

The Blight is two books in one with the first half devoted to a campaign guide with a complete history, timeline, and overview of the city as well as new classes, players options*, and races, along with a detailed gazetteer of each of the city's 13 districts. The last half comprises the adventure path, Levee, a campaign set within the rotten and degenerate urban confines of the city, where the PCs must scratch and claw their way to survival starting at 1st level and continuing through 9 adventures -- each one highlighting a different city district -- all the way to 10th level and above. The book also includes a player-friendly, full-color poster map of the city to enhance everyone's enjoyment of the place.

*No new classes for the Swords & Wizardry version: Matt said "no."

As is the Frog God Games norm, the book will be produced in both Pathfinder Roleplaying Game and Swords & Wizardry versions. However, departing from the FGG standard for the Pathfinder version, the adventure path uses the Slow Advancement Track for experience points allowing the GM to create a slow build among the horror and urban sprawl of the city with no easy means of escape for the players through high-level spells or mere virtue of skill at arms. The book itself also supports Medium Advancement Track play, as do the ancillary adventure products mentioned below, but we wanted to provide this unique opportunity for players and GMs alike to really have the chance to stew amid the filth and stench of an urban nightmare like The Blight, where escape is never as easy as it sounds.

Oh, and one more thing, The Blight is dark...so very dark. A landscape of desperation and depravity, The Blight takes the usual no-holds-barred gritty adventure style of Frog God Games and cranks it up another notch. The Blight does not violate the restrictions of the Pathfinder Roleplaying Game Compatibility License and never abandons good taste, but it is gruesome and it does not paint a rosy picture. Not everything is black and white (the players frequently encountering ever darker shades of gray), the good guys may not always win (the good guys may not always be evident), and there are no guarantees of a happy ending. In the Blight, sometimes survival alone with mind and body intact (or mostly intact) is reward enough. Though don't be fooled, opportunities for heroics and great reward abound; there's just not always a simple and clear path laid at the feet of the players to choose from. Consequently the materials of The Blight may not be suitable for some audiences below the age of 13. Forewarned is forearmed, and we always advocate that game products be purchased wisely and age-appropriately.