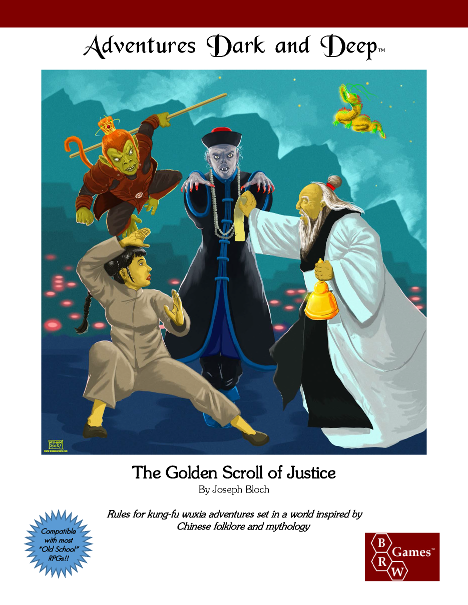 I am WAY behind on announcing recent OSR releases. I thought this week of vacation would lead to some catch up time, but "uncle duties" ran from 10 AM Sunday through 7 PM Tuesday. "Pinky" was awesome but this uncle is exhausted. It is now Thanksgiving, catch up commences NOW.

The Golden Scroll of Justice is an interesting release. Most Asian themed RPG supplements I've read or seen in the past seem to make a hodgepodge of various Asian cultures, histories and mythology and churn out something that is less than the sum of it's parts. +Joseph Bloch went the other way, bringing "your old-school RPG into a whole new world of wuxia/kung fu action based on Chinese mythology, history, and folklore."

Sticking to a single culture and making it true is probably the best thing your can do to make it come to life. The Pundit ( +Kasimir Urbanski ) did such with Arrows of Indra and his recent Dark Albion: The Rose War

Two things that never clicked with me as far as RPGs go have been superhero games and Asian settings. The Golden Scroll of Justice is temping enough to make me want to invest the time in it to see if it clicks.

The Golden Scroll of Justice lets you bring your old-school RPG into a whole new world of wuxia/kung fu action based on Chinese mythology, history, and folklore. The book contains:

Two new PC races: the shanxiao (monkey-man) and gouren (dog-man)
Two new character classes: the wu and the fangshi, along with guidelines on how to use your existing classes in a mythic China setting
Hundreds of new spells
Rules for kung fu that fit seemlessly into the existing combat and skill system, but still allows for cool "cinematic" moves
New weapons and armor
New magic items
New monsters
And much more!
The rules are designed to be completely modular; take what you like, leave what you don't. Want fangshi and gouren but not the kung fu system? No problem. Everything will still work fine.

Note that this is not a complete game! This is a supplement intended for use with your existing old-school role-playing game
Posted by Tenkar at 9:35 PM