Defending the Offensive, One Bleeding Cool Article at a Time 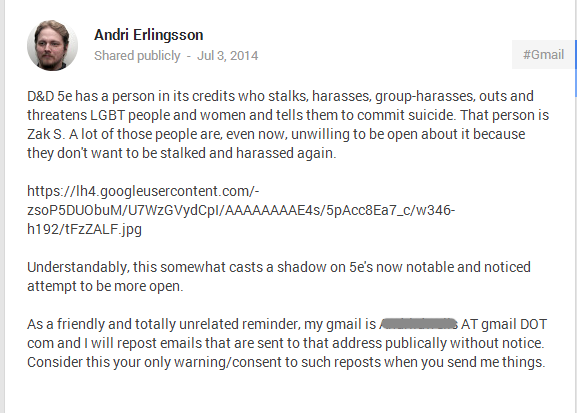 I give some major props to +Christopher Helton for his latest article over at Bleeding Cool. It isn't easy defending people who are, by their online personalities at least, pretty much assholes. That doesn't make it right to spread lies about them, especially viscous allegations that they are homophobic and transphobic. Although neither Zak or The Pundit are my favorite people, offensive slander such as this for no other reason than to push an agenda is bullshit and should be called out. Because if we don't call the bullshit when we see it, the next accused could be you...

As Chris says in his article:


It is hard to defend people who have done wrong. But, despite saying or doing these things, that doesn’t mean that they deserved to have lies made up about them either. Gaming needs new blood, it needs to be more inclusive. However, it doesn’t need gatekeepers. It doesn’t need to be told who are the “right” people to be involved in the hobby and who are the wrong ones. And it certainly doesn’t need liars and bullies.

Well said and well done.
Posted by Tenkar at 6:03 AM