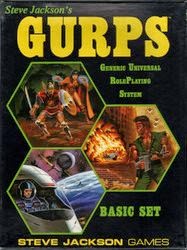 I'm trying to reacquaint myself with GURPs to enable myself to properly review a product for said system.

Back in the olden days, when we played just about everything, GURPs was the universal system we always tried to shoehorn right back to a fantasy setting - which to my eyes 20 years later makes it seem like we were doing the system a disservice. GURPS can do fantasy, but I think it does other genres better, especially without the baggage of D&D making for comparisons and expectations that are neither needed nor helpful, but I digress.

I never realized how many editions of GURPs the game has evolved through until now. I came into GURPs with Man to Man and then an early boxed set. Over the years I have accumulated various editions and supplements - next to D&D and it's various clones GURPS and Tunnels & Trolls are neck and neck for 2nd place in the amount of closet and storage space they take up.

The thing is, there are 4 editions of GURPs, and I couldn't tell you the difference between any of them. I suspect it involves point cost changes, but it could be something bigger. No idea.

Shit, I want to play GURPs Discworld now...
Posted by Tenkar at 9:22 PM

Email ThisBlogThis!Share to TwitterShare to FacebookShare to Pinterest
Labels: gurps