I'm really not much for "blog carnivals" and the like. I enjoy reading them, mind you, it's the act of
participation that I often fail at. Probably has much to do with the fact that I usually have an abundance of crap to post about of my own and the distractions get lost in my own noise. 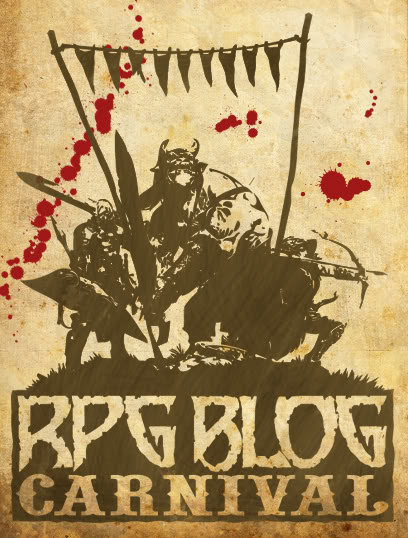 Not this time tho', and it's not just because this month's host is a member of the infamous "B Team". ;)

Nope, this time it's because it's a topic I hold near and dear - VTTs or Virtual Table Tops.

Let me give you a quick background of my VTT history. I've tried (and own licenses for where applicable) Klooge, Screenmonkey, MapTools, Battlegrounds RPG, iTableTop, Fantasy Grounds I and II, Roll20 and a small handful of others that escape me at the moment. Yes, a virtual plethora of virtual table tops.

As others, I really enjoyed playing with Fantasy Grounds II "as a player". Never got around to trying it as a GM because it was just too damn intimidating for me to even try to convert an adventure for use with the software, let alone a ruleset. Fantasy Grounds can do some amazing things in the hands of the right person - I just wasn't that person. Still, it is the interface that brought me back to the work of RPGs, and for that I am thankful.

Today, my poison of choice is Roll20. For a while, it was Tabletop Forge, but that was rolled into Roll20, and in the end it has worked out fine. In the beginning, however, it was a damn near bloody mess, as it didn't (does now, and does with ease) allow one to draw freehand - so if you wanted to actually map out the dungeon as your group progressed, you were shit outa luck.

Roll20 is truly night and day from where it was then to where it is now. These days, I mostly use maps from whatever adventure I'm running, drop it onto the virtual table top, cover it with "fog of war" and reveal the map as the party progresses. Heck, I don't even use tokens. I'm like "old school" "new tools".

So yeah, that's me pimping some VTTs for the current RPG Blog Carnival. VTTs allow me to game with folks from across the world with a schedule that works for all. As an adult with a family of my own and real employment, it sure as hell beats trying to organize a regular group in "meat space".