About to Open the Sandbox - Dyson's Maps Will Be the Toys 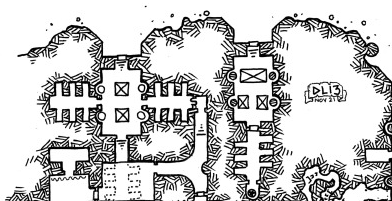 I've found that sandboxes work best AFTER the PCs have established themselves a bit - once they hit 3rd level or so, it's time to remove the training wheels and allow the players to explore the world at large as they wish.

My last campaign was set in Rappan Athuk, and as a megadungeon, it allowed for my players to decide on the challenges they were to seek out, but at the same time, I had an idea where they would probably be for the following session. That doesn't apply this time, especially since I'm running two groups in the same setting and allowing crossovers - the events experienced by one group may be reflected on the other.

So, my game plan is to load up a crapload of +Dyson Logos' awesome dungeon maps into Roll20, each with a sentence fragment or so to describe it. From there, an index card to fill in some of the major encounters in each, as well as the seeds to plant for the groups and let it all fall where it may. I may also load up some DCC adventures, but these would be more in the line of major dungeons / ruins / events.

It's been many years since I allowed myself to DM an adventure that I can fit on an index card, but it allows for more spontaneity from my side of the screen. This past Friday's session fell into that category, as work and life events left most of my preparations unwritten and residing in my head.

I enjoyed the challenge and embrace it ;)
Posted by Tenkar at 2:51 PM