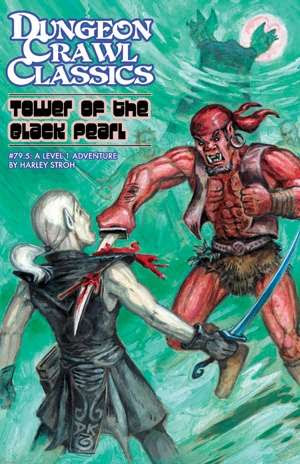 The Tower of the Black Pearl is a DCC RPG conversion of the 3x adventure of the same name, authored by +Harley Stroh and converted to the DCC RPG by +Daniel Bishop .

How is it? I used the 3x version (converted on the fly) to kick off last week's Swords & Wizardry Campaign, and it f'n rocked. Hard!

In truth, for the DCC RPG I can more readily see this run as a 0-level funnel: the tower makes it's appearance and hopeful adventurers commandeer a skiff or two and swarm the tower, hoping to find the Black Pearl. When they do, hilarity ensues.

I don't want to give away any of the big twists, as they are awesome, but this really would work well as a funnel. Well, I suspect it would. It may be the whole swarm of noobs wipes, but that's what funnels are for, right? ;)

If I have one complaint, it's the map. It's a bit harder to read in this version of the adventure and it's awkwardly divided between two pages. To run it, you'll absolutely need to print it out. To use the map with a VTT, I'd suggest you crib it from the earlier version if you have access to it. Man, I never bitch about the DCC RPG maps...

In any case, DCC or 3x or S&W, the Tower of the Black Pearl is a blast, both for the players and the DM - it's hard to go wrong when both Harley and Daniel have their hands in an adventure.