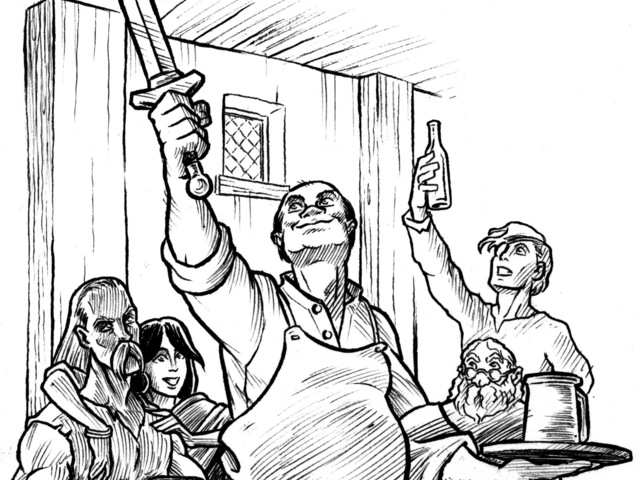 Let me just say this up front - I'm already in for $50 and I'm toying with the idea of upping that to $100. In any case, there will be a dwarf named "Tenkar" running a tavern in the City of Dolmvay. I've already brought that up with Pete ;)

So, why support the Guidebook to the City of Dolmvay if it's going to be PWYW in PDF? Maybe because you want all of the excellent OSR setting books and adventures that Pete's throwing into the pot.

Or maybe you like the idea of an OSR city that's OGL and can be used by other publishers in their settings and adventures.

Perhaps you've checked out Small Niche Games releases in the past, or maybe you want to kick in because it's simply "cool shit' ;)

The first issue of Brave the Labyrinth Fanzine is PWYW, (edit - Second Issue too)s o you can check out Pete's style of gaming and writing for free.


Kickstarter: Guidebook to the City of Dolmvay

The Guidebook will be largely Open Game Content and will be offered for free under RPGNow's Pay What You Want Program.. My goal is to provide professional and amateur publishers with a simple to use common city setting to publish their city-based OSR fantasy adventures...

All money earned from Kickstarter pledges will be put towards artwork and maps (with a bit held out for printing/shipping/handling), so the more backing I receive the prettier the product will look. I expect the look of the product to be a factor when attempting to get other publishers on board, so the more professional it looks, the better.

Are you waiting for an invitation? Here it is... check this out :)