A Kickstarter to Support D&D Next? Is Next Going OGL With an SRD? Amethyst - Fantasy & Technology Collide

I have a previous version of Amethyst somewhere, purchased back in the 3x days, when I collected RPGs and did not play. It was certainly a pretty release, but nothing in it lit my fires and said: "you need to run this".

I saw the Kickstarter to reboot it for 4e and Pathfinder earlier this month, and again, looked cool but with so many gaming Kickstarters out there, it wasn't on my short list and barely on my radar.

Well, that is until I saw today's update on ENWorld.

Morrus is listing this as a rumor, but it's a rumor with legs, as the Kickstarter for Amethyst lists D&D Next as one of the supported systems. Here's yesterday's Kickstarter update that mentions it. 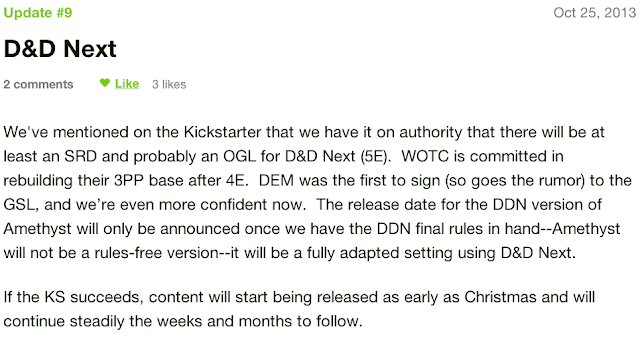 If D&D Next IS truly OGL with an SRD, that changes the playing field to a large extent and is a huge backtracking from the GSL.