Something Was Left Off of the Review Pile List Voting... Ghosts of Dragonspear Castle for D&D Next... I Suspect It's NOT a Loss 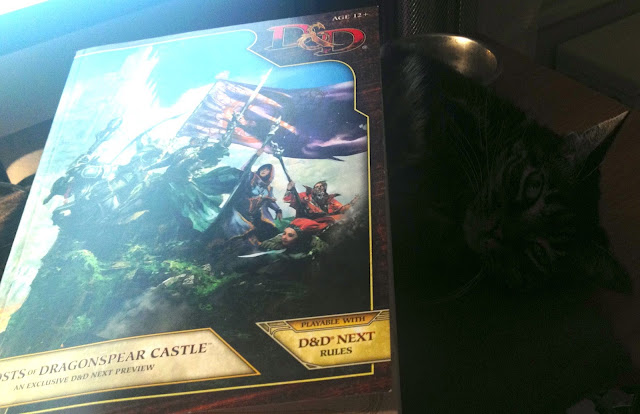 As I've said on earlier posts, my review pile is much larger than my free time will ever allow me to dig through it.

That being said, Ghosts of Dragonspear Castle probably should have been included on the list of games to be voted on. That was an oversight, but probably not a loss.

My experience with D&D Next is mixed - it brought the core members of our gaming group together, and then nearly destroyed the same when the first Friends & Family update to the Beta (or at least, the first update AFTER we were accepted) made the game far more "wonky" and less playable then any of us desired to play. Yes, most of us moved on to ACKS, AD&D/OSRIC and now DCC as a group, but the final taste that D&D Next left with us was not a good one.

Now, after pretty much ignoring the Beta updates (both regular and Friends & Family) as my interest was no longer there, I thought the first "print" version of the Beta rules would be a good place to take a new look with fresh eyes.

It appears to me to be some hybrid of AD&D 2e / D&D 3.5 and the kitchen sink thrown into fill in the gaps. Alright, maybe not so bad as to deserve the kitchen sink line, but it doesn't seem to really do anything that hasn't already been done by a previous D&D rules system.

As for Dragonspear Castle the adventure? It's a campaign railroad, but so is every adventure path. It's not poorly written, but doesn't excite me - at least what I've read thus far. Probably won't read further either.

I'm kinda glad I forgot to include it in the voting - I might have actually have had to read this in full ;)
Posted by Tenkar at 8:07 PM