My first introduction to the "Non System Specific" stat block employed by Eldritch Ent was in Lich Dungeon Level I. I found it needlessly confusing for something aimed at OSR gamers and the straight forward stat blocks that are employed in the vast majority of adventures aimed at such systems.

Here is a sample of a stat block from Lich Dungeon Level I which I reviewed in May of 2012: 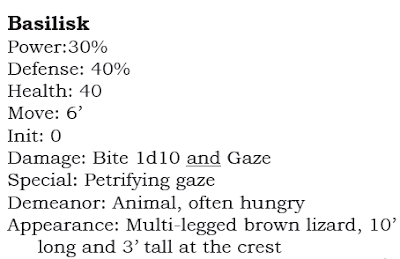 Painfully annoying to convert, and really, if it's aimed at old school or OSR rulesets, why should one have to convert at all?

Here's an example from the recent release of Lich Dungeon Level II: 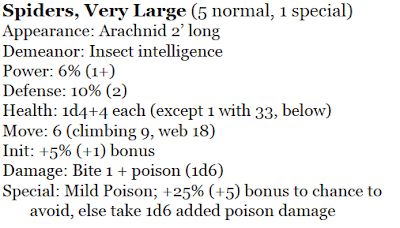 The conversion from percentile to straight up plusses based on a D20 are included for you, which is a big step up. Still, it's not easy to read and is repeated in total in the back of the PDF for each monster encountered. That results in on heck of a needless page bloat. The above works well for a bestiary in the back of an adventure, but not when it's used to fluff out an encounters "page space".

Now here's an example from a recent release, The Last Candle:

The above is about the most I want when I'm running an adventure and looking at an encounter or dungeon room or whatever. It also aligns fairly closely to classic stat blocks in adventures.

So, to recap. Lich Dungeon II has an improved stat block compared to Lich Dungeon I, but it's still needlessly bloated. The adventure itself has some charm to it. More on that later.
Posted by Tenkar at 9:38 AM