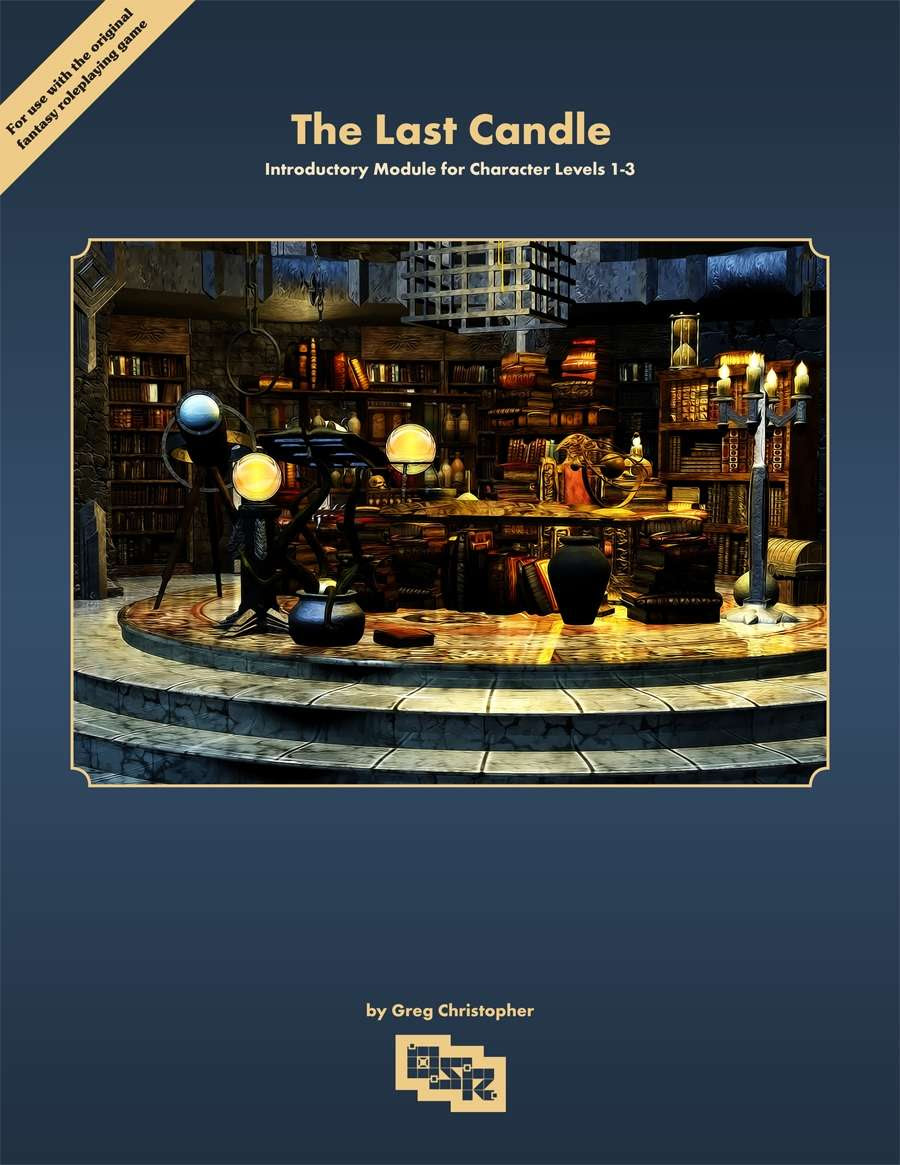 I've been falling behind on my reviews, so I'm starting the "catch up" phase with The Last Candle by +Greg Christopher of Chubby Funster Games. You know Greg - he wrote the recent OSR release Ambition & Avarice (recently went POD too).

So, what makes The Last Candle special? Quite simply, it is written to give you and your players many game nights of play.

First, its a micro-setting of sorts. It includes a map and descriptions of the Satrebonne River Vally (immediate setting).

Secondly, it includes a base of operation for the players - The Priory of Chaurillon (alright, it's really spelled the French way, but I don't grok French) It is detailed with locations of importance and NPCS. So now we have both general setting and urban location for the group.

Last we have the Eagle's Eyrie, which is an excellent dungeon. You really do get a complete campaign starter with this.

I playtested the Eagle's Eyrie and ran it for my weekly group. It proved to be a suitable challenge with some fun role playing opportunities within. No PCs died during the playtest, but that was due to some very smart playing on the part of my players ;)

Really, for 4 bucks it's hard to go wrong.

Here's a bit of advice from the adventure:


...it must be noted that you have enormous freedom to customize the challenges in this module. There is plenty of extra space on the campaign map for you to add your own content, content from other modules, or just random wilderness encounters. You are encouraged to give the NPCs their own agendas and have them work independently toward those agendas while the players are busy with other tasks. For example, the players might return to the Prieuré after exploring the Eagle’s Eyrie to find that xxxx xxxxx has been lynched for practicing foul magics. This occurred because the players told xxxx xxxx how they saw xxx healing an injured man. Actions should have consequences and every NPC has their own agenda.

You are also encouraged to give the players significant freedom as they investigate the region and the dungeon at their own pace. This is intended to be a mini-sandbox where the players can explore in the manner they desire.

The Prieuré de Chaurillon lies isolated in the upper valley of the Satrebonne river. The empire that once protected it has fallen. Barbarian hordes now roam the land. Once tamed borderlands have become infested with monsters and foul beasts. The monks of the Prieuré are all that remain of their ancient order. They stand alone against the darkness of the age; The Last Candle of their faith.

This module provides the Dungeon Master with everything they need to build an entire campaign in the Satrebonne valley; a full-color campaign map of the entire region, wilderness encounters, struggling towns that could benefit from player protection, locations of interest to explore, a fully-detailed priory compound protected by a palisade, descriptions of prominent NPCs, plot hooks to draw the players into the world, unique items to add to your game, a complete dungeon complex to explore, and guidance on how to weave it all together.
Posted by Tenkar at 4:46 PM