A Sneak Peek of the Mazes & Perils "Expanded Edition" 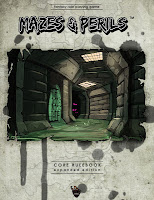 +Vincent Florio was nice enough to forward me a sneak peek of some of the layout and such of the Mazes & Perils Core Rules "Expanded Edition". Vince and I have a bit of a history, which can basically be summed up as "screaming at each other without listening until we actually listened", which is to say that it's much easier to converse with others when you remove the extra noise. 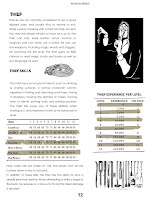 We converse much better these days, thank you very much :)

Anyhow, as I was saying, Vince has allowed me a sneak peek at the forthcoming Mazes & Perils Core Rules "Expanded Edition". Would that abbreviate to M&PCREE?

The layout is MUCH improved (I can't speak about the content itself, as all I have access to is bits and pieces sent to me). Dare I say it, it looks like a professional layout.

Looking at the sample monster page, it strikes me that S&W doesn't have Treasure Type listed with the monsters in Monstrosities. Was this a Holmes Edition addition? (for those not in the know, M&P is sort of a Holmes Basic retroclone). Hmm, while I'm at it, it appears the monster heading font might be a bit too bubbly - the "G" looks more like a blobby "O", but maybe that is just me. 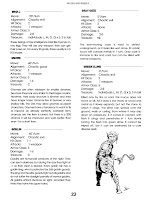 Nice choice for the art for the Monster Section art header page. Anyhow, interesting soon to be addition to the OSR palette. Please don't ask me if we need more additions to the OSR ruleset list of choices - I'm one of those that believes you can't have enough. What I really should do one day is make myself a Franken-Game from all of the OSR rulesets that are freely available (no houserules - just published rules) and see what I can come up with ;)
Posted by Tenkar at 11:10 PM