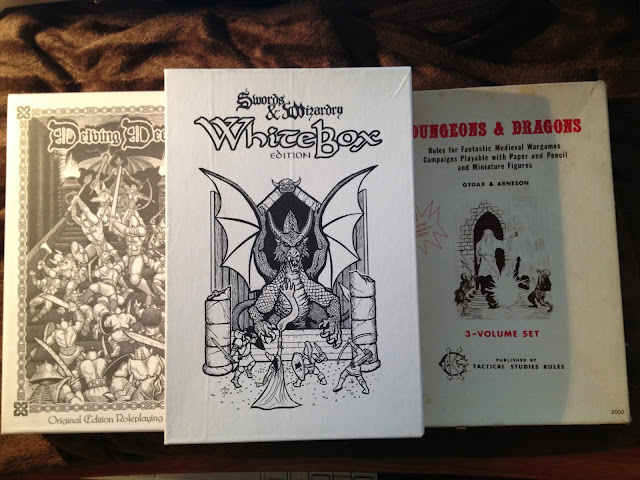 Well, with the soon (alright, November) release of the "Deluxe" Reprinting of the Original Dungeons & Dragons Boxed set, this might all be moot, right? Because we're all going to be shelling out $150 for a new reprint of a cloned game. Well, actually, I might be one of the many suckers myself, but whatever ;)

So, when it comes to the Original and it's two main clones, how close is the combat system amongst them all?

Weapon (and armor) costs between OD&D and the Swords & Wizardry White Box are nearly identical across the board, which is kind of surprises me. I mean, sure, they changed up the order of the items, but except for things like the spear, the prices are the same. Delving Deeper changes up the prices to the point where you can't even figure out if there was a forumla they used - little rhyme or reason. Sure, it's a minor thing, but something that stands out none the less.

As for Attack Matrixes, things get a little complicated.

OD&D WB, a 1st level Fighting-Man needs an 18 to hit AC 2. Actually, that applies to 1st level Clerics and Magic-Users too. Every 3 levels (starting at 4th) a Fighting-Man moves up a step on the Combat Matrix (every 4 levels for Clerics and every 5 for Magic-Users). Each step on the Combat Matrix is an improvement of 2 to 3 points to the chance to hit. Phew!

S&W WB starts everyone at a 17 to hit AC 2 (there's also an acceding AC option, but we'll avoid that for now). Otherwise, the breakdown of the combat charts are similar to DD. Not exact, but similar.

Interesting how S&W WB starts out with the better attack chance, and winds up tied for the worst
Posted by Tenkar at 8:28 PM