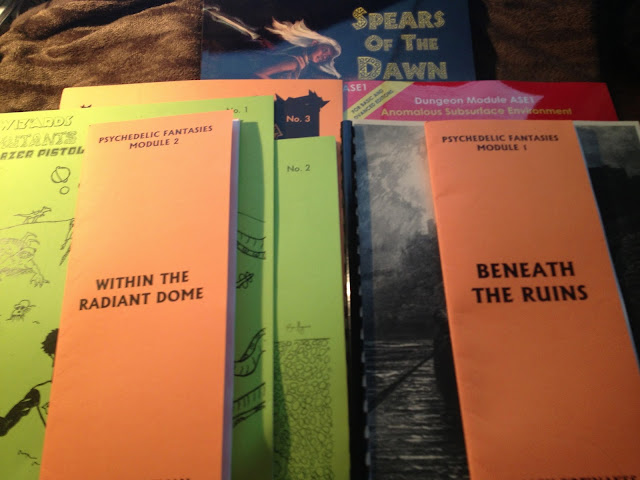 I went shopping with the wife for bathroom wallpaper and came back to find the following waiting for me:

Spears of the Dawn - Scheduled to ship in March, this Kickstarter shipped in February. A month early. WTF? Kevin Crawford, you are making all of the other RPG Kickstarter projects look bad. Does this mean that "three months late" is no longer the new "on time"?

Anomalous Subsurface Environment 1- I also have ASE 2-3 in print. When I decide to take a step away from Rappan Athuk for a more gonzo megadungeon, this is where I'll be taking the party.

Wizards, Mutants, Lazer Pistols 1, 2 and 3 - In for a penny, in for a pound. I've flipped through #1, and it looks like fun. I'll review these and AFS in the coming weeks.

Psychedelic Fantasies Modules #1 and 2 - Damn it! #1, Beneath the Ruins appears in WMLP #1. Still, it was cheap enough, and the cover has the map on the inside and is not attached to the module, which is cool. At least #2, Within the Radiant Dome, looks to be new
Posted by Tenkar at 5:22 PM