Some Questions / Observations on B1 - In Search of the Unknown 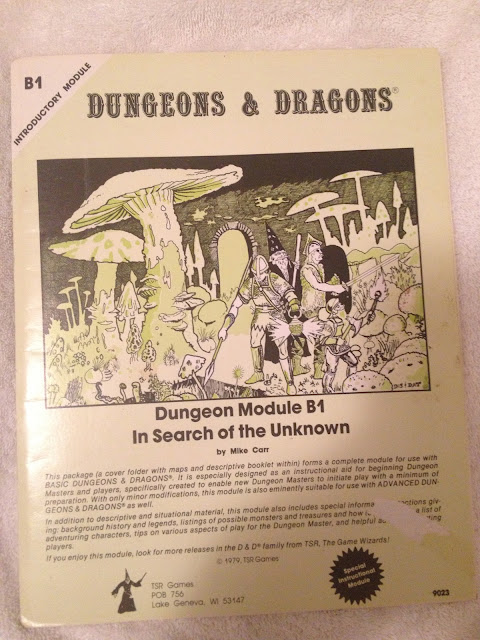 I'm away for the weekend, and the only things I brought in print with me that were gaming related were OSRIC and B1 - In Search of the Unknown. My intention is to start writing the introductory adventure for my AD&D campaign, and what better inspiration than Dungeons & Dragons Dungeon Module B1? (Okay, one could argue B2, but it is what it is).

So, here's some observations from B1:

2 - Non-player character clerics include Tassit, Servantjü of St. Cuthbert. The World of Greyhawk was casting a wide web back then.

3 - Fighting Men NPCs include Krago of the Mountains (Dwarf) with Str 18/54. Exceptional Strength was purely an AD&D concept as far as I can recall.

4 - I'm pretty sure thieves were restricted to Humans only in Basic Dungeons & Dragons, but there is at least one of each of the player races in the NPC list.

5 - I had forgotten that B1 was a "stock the monsters and treasures from list A and list B" type of adventure. Hardly easy on a beginning DM, but amazingly awesome for reusability of the adventure among the same group / intertwined groups. The room descriptions themselves dont change, but the contents do.

6 - It makes a point of introducing tricks and traps to the players and the DM - it's not a funhouse dungeon, but it has its moments.

7 - There is a list of potential hirelings and henchmen for the PCs to hire, but no town to actually find them within. We know they aren't hanging around outside the dungeon waiting for a job. I guess that's why they swapped this out for B2 in the later Basic D&D Sets.