Looking at "The" Monster vs. "A" Monster in Dungeon Crawl Classics 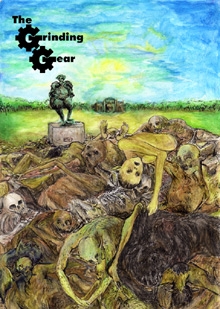 "The" Monster Vs. "A" Monster paragraph of the Dungeon Crawl Classics rulebook reminds me quite a bit of a similar world view from the Lamentations of the Flame Princess' Weird Fantasy referee book on monsters.  Just like in LotFP WF, the key is to make sure they are special to the players.

Is there more than one minotaur in your game world? Is there more than one unicorn or more than one chimera? To a provincial farmer with a ten-mile-wide worldview, does it really matter? You can make monsters more special by referring to them as “the” monster (minotaur, unicorn, chimera, etc.) rather than “a” monster. Whether it is you as the judge describing the creature or an NPC speaking to the player characters, remind yourself that the in-game point of view is often from a perspective of limited knowledge. To any serf with a fearful view of monsters, “the” minotaur is the only minotaur in the world. Describe it as such and its importance will grow in the mind of your players. They will be left wondering if there really is only one minotaur. (page 378 DCC RPG)

You will note that unlike almost every roleplaying game ever, there is no “stock” list of monsters included with this game. Because monsters should be unnatural and hopefully a little terrifying, using stock examples goes against the purpose of using monsters to begin with. Again, this is from an in game perspective. That the players need challenges and fights is understood, but the temptation is always too great to skim through a standard monster list to lazily fill out an adventure. Don’t do this. Not ever!  (page 48 LotFP Weird Fantasy Referee Book)
What I like about the DCC RPG world view is that there doesn't have to be just one minotaur.  It's that the characters' world view only allows them knowledge of the one.  Making monsters special in a game like DCC is part of it's aura and thesis a great tool.  Then again, giving the players something new and unique can be ever better ;)

On a side note, now that I think of it, most of the LotFP adventures would work very well with the DCC RPG.  Death Frost Doom and The Grinding Gear in particular come to mind.  I may need to break these out and look at them with fresh eyes.