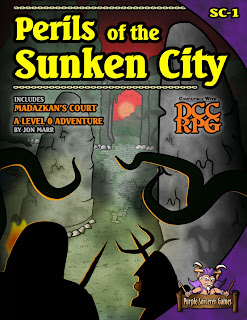 Continuing with my Dungeon Crawl Classics RPG Experience.
This time up we are looking at Perils of the Sunken Sea by Purple Sorcerer Games.  I almost wish I had reviewed this before Sailors on the Starless Sea, as it would have stood out better without it being compared to the other.
That being said, Perils of the Sunken City does offer something that SotSS does not offer - an urban environment that you can ground your party's initial adventures in.  The town of Muttontown Mustertown (oops)isn't described in detail as it doesn't need to be.  Broad stokes with detailed areas the players will interact with is what is supplied and it is ample for what is needed for the adventure.  If further is needed later, the GM has more than enough to build off of to make the location unique.  This is one of those times when less is certainly more.  Nicely done by Purple Sorcerer Games.
As for the adventure itself?  There is nothing inherently bad with it, but it lacks the emotional hook that drives Sailors on the Starless Sea.  When peasants raise arms to save their fellow villagers, the players will find themselves invested in the outcome.  It isn't the same when peasants are doing it for fame and fortune.
Interestingly enough, the set up of Perils on the Sunken City reminds me of Lich Dungeon.  Not in any direct manner, but in general feel.  Perils of the Sunken City pulls it off much better than Lich Dungeon, which can only be a good thing.
If you can only buy one DCC RPG Adventure PDF right now, I'd suggest getting Sailors on the Starless Sea first.  It will grab your players and invest them in their zero level noobs as the funnel weeds out the chaff.  If you can afford a second adventure, Perils of the Sunken City would work fine as a follow up for your newly minted 1st level party of adventurers.  They will be looking for fame and fortune after saving their village.
From the Blurb:
Prepare your players to walk the walk... teach them how to Crawl!
Most find death in the crumbling ruins that stretch beyond sight into the mists south of the Great City; once rich districts now claimed by swamp and dark denizens. But for the desperate few, the ruins offer treasures the Great City denies them: fortune, glory, and a fighting chance!

Challenge your players with Perils of the Sunken City, the first in a series of 0-level Dungeon Crawl Classics RPG adventures set in the massive crumbling ruins of the swamp-ravaged Sunken City. Easily introduce waves of beginning characters to your world, winnowing 0-level mobs down to bands of hardy explorers ready for even more dangerous fare!

Features of Perils of the Sunken City
Posted by Tenkar at 11:33 AM