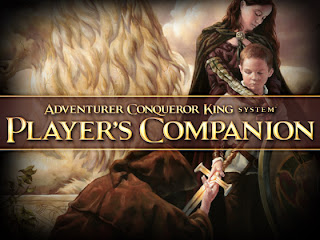 The Adventurer Conqueror King System has been a hit since it's official release last week (and is currently #2 at RPGNow, after the #1 selling and $1 priced Legend).  I know I'm liking it.  Heck, I've been doing a multipart review of the game system.  It's definitely Old School.

The guys at Autarch have started a Kickstarter for the ACKS Player's Companion.  It's already over galway funded with 5 weeks to go.  It's pretty safe to say it's going to hit it's  goal, and maybe even a bonus goal or three.  New classes, new spells and a point based customized class system, that allows you to design your own classes.  It's backwards compatible to the classes in the core book and the Player's Companion, so balance should not be an issue (or maybe it will be.  stuff like this shouldn't be in the hands of a min/max player, but it's an awesome GM tool)

Here, let me borrow from their Kickstarter page:

With the Adventurer Conqueror King System™ Player's Companion, you will get:
·         6 new character classes, including the dwarven machinist, dwarven spelunker, elven ranger, mystic, priestess, and shaman
·         144 character generation templates with pre-selected proficiencies, spells, and equipment options to create archetypes such as the Aristocrat Bard, Buccaneer Thief, Gladiator Fighter, or Runecaster Shaman.
·         100 new spells, including never-before-seen dweomers such as dismember, earth's teeth, and undead legion.
·         A point-based customized class system that lets you create the perfect blend of fighting, thievery, divine, and magical power. The custom class creation rules are 100% backwards compatible with every class in the ACKS core rules and all of the classes in the Player's Companion.
Pretty damn cool!
Yep, I'm in again.  I like getting signed gaming stuff ;)
Posted by Tenkar at 6:03 PM